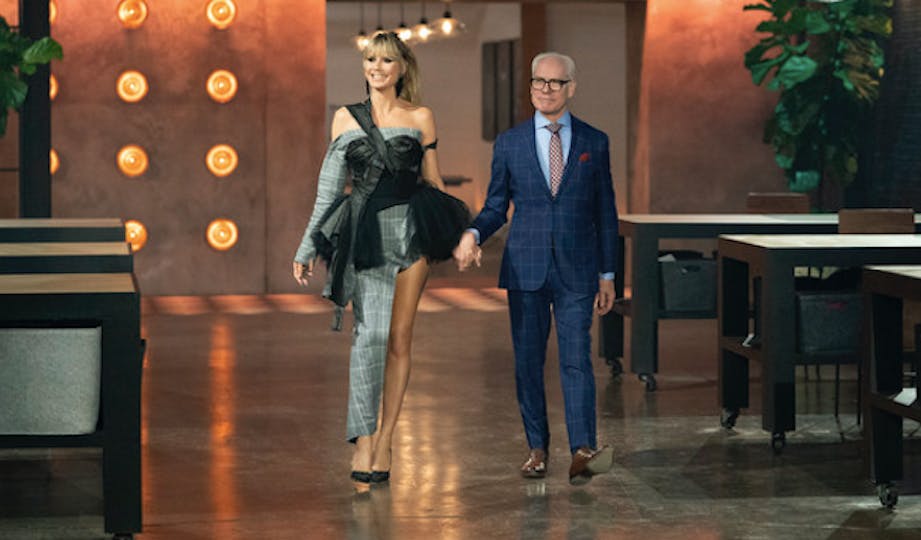 When it comes competitive TV, you can keep Love Island, Bake Off and Strictly Come Dancing. Because Making the Cut, the design series aiming to find the next global fashion brand, is back on Amazon Prime. If you haven’t heard of it, picture Project Runway, the cult show that has been running for 19 seasons and launched the career of designers like Christian Siriano (a major player on the red carpet as well as NYFW). Making the Cut, which dropped two episodes today, is hosted by not one but two alumni from Project Runway: Heidi Klum and Tim Gunn. And it’s the pair’s chemistry – one an impeccably dressed gentleman who coined the catchphrase, ‘Make it work!’, the other one of the world’s most recognisable supermodels – that gives the show such heart.

Interviewing them over Zoom, each in a different location, you get the sense that this isn’t just an 18-year work friendship. Remembering when he met Klum – that very first day of filming Project Runway – Gunn says he thought he was going to tumble over. ‘My knees were shaking so badly. And I have to tell you, I’m still in awe of Heidi. 18 years later, I’m still in awe.’ Klum laughs and says, ‘I love you Tim!’ before explaining how he, as part of the faculty at the school where the show was filmed, the famous Parsons School of Design, very kindly lent her his office as a makeshift dressing room. ‘I remember in your bathroom, there was a shower, one of those ones where you step into the tub. We moved the curtain to the side, which was my rolling rack, so all my clothes were hanging in your shower. Tim gave me his office. That’s how we met. And I make a mess very fast.’

As long-time fans will know, they’re both very opinionated. If Klum says she wants to wear something straight off the runway, you know you’ve nailed it. If Gunn, who acts as a mentor to the designers as well as a co-host, says, ‘You have a lot of work to do,’ you know you’re going to have to make every minute until the catwalk count. But it’s never (ever) nasty. ‘We’re not coming from a mean place. I feel like you sometimes want to put a little fire under someone’s butt to get them stronger and more confident in their designs so that they’re not questioning so much but really going for it,’ says Klum. Gunn says 29 years of being a teacher have taught him to leave his own aesthetic at the door. ‘I want to know where they’re coming from. I want to know what they’re attempting to do. And then I’m going to give them feedback about my feelings based on their information. I would never just walk up to a cutting table and say, ‘This is horrible. What are you doing?’’

And he’s right. When he’s standing with each designer backstage, waiting for their model to walk the runway for the judges, you get the sense that he’s as nervous as they are. ‘My heart’s pounding through my chest,’ he admits. Yours would be too if you had to present your designs to a panel that includes Klum, and this year’s superstar line-up of Nicole Richie, who is returning from season 1, Moschino’s Jeremy Scott, musicians Chloe x Halle, mega-stylist Jason Bolden, and model Wisdom Kaye.

The stakes are high in Making the Cut. Not only will the winning designer take home a prize of $1 million to invest in their business, but each week’s winning look will actually be available to buy on Amazon Fashion (which explains the show’s tagline: ‘Watch it. Wear it’). The winner will eventually launch a co-brand with Amazon Fashion, and will sell their existing brand on the website. For a working designer trying to build a brand, that’s huge, hence the fact that it can feel like a ‘pressure cooker’, according to Klum.

‘These are real people. They’re not robots. They’re all leaving family and friends behind and then you are in this pressure cooker and you want that million dollars. You’re also showing yourself to the world so you’re making yourself vulnerable for people to see who you are and what you’re about. So, yes, people get emotional and so do we.’

Set against the backdrop of LA, the first episode sees the designers creating an evening look, with a catwalk show along the iconic Rodeo Drive. The second episode focuses on activewear, with a particularly special prize – the winner of the challenge got the opportunity to create a capsule with Champion.

You can see why things get intense – and why they so want to impress the judges. Klum, for one, believes in the importance of being yourself when it comes to fashion – and even got teased at school for her maximalist approach. ‘What was fashionable in my mind was more important than getting teased. I always had the biggest earrings. I had a perm. You name it, I wore it. You just have to go with your gut and not care about what others say.’ Will the designers take her advice? Tune in and find out.