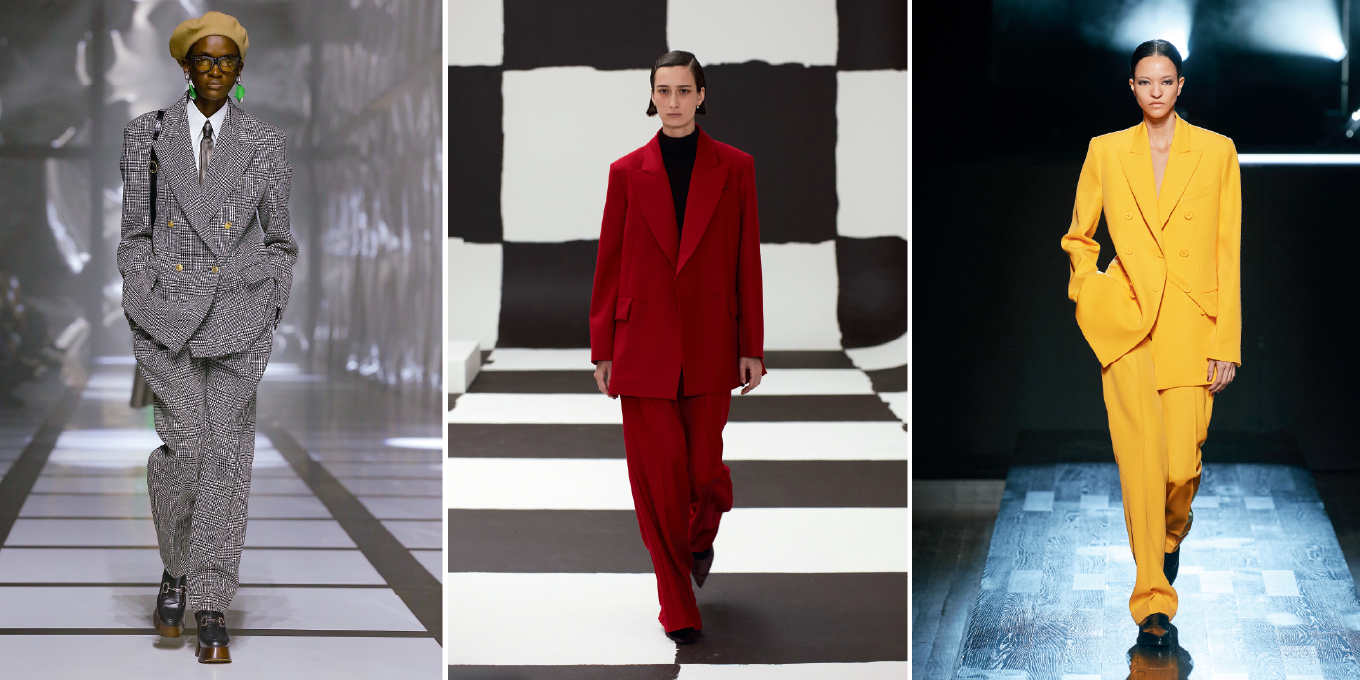 Following the influence of the Le Smoking and other Saint Laurent creations that were considered avant-garde at the time, more ready-to-wear brands started offering trouser suits. Still, it took time for them to become widely accepted women’s attire, and it wasn’t until the 1980s that women started wearing them to the office, sometimes with the power-dressing oversized shoulder pads of the era, explains Palmer. In the ’90s, the pantsuit finally became normalized in women’s workwear wardrobes. During that era, Belgian fashion designer Martin Margiela made waves by experimenting with deconstructed tailoring, while Japanese designers like Yohji Yamamoto championed loose-fitting asymmetrical suits.

If you look closely, this season’s slouchy suiting hearkens back to some of those game-changing oversized silhouettes of the ’90s and early 2000s, says Palmer. “It’s probably sort of a reaction to the very, very tight clothes that have been in fashion for so long,” she says. The new workwear is comfort-driven, and suits are no exception. Emily Gordon-Smith, content director at trends-intelligence agency Stylus, sees this relaxed fit as the way forward. “We’ve been tracking a return to tailoring for some years now, but it’s the soft [knit fabric] pantsuit that is winning out with consumers,” she says. “Easy volume with a casual quality is the key to this silhouette’s success—nothing like the confined, restrictive tailoring of traditional officewear or historic ’80s-influenced power dressing. The soft pantsuit can take you from brunch to the boardroom and is highly forgiving.”

Beyond a drapey, comfortable fabric, the top suits of fall/winter 2022/2023 feature a key colour from head to toe, according to Gordon-Smith. “Single-tone dressing is all the rage, and the bolder the better,” she says. “So think hot-pink or grass-green suits styled in a heightened monochromatic way with matching footwear and accessories.” On the runways, there were suits in warm taupe, moss and Bordeaux at The Row, in bright fuchsia  at Valentino and in lovely shades of yellow at Jil Sander and Michael Kors. While classic wool sets continue to dominate the catwalks, designers are also offering trouser suits in more interesting textiles too, Gordon-Smith points out, like velvets and satins.

Like so many other trends, it’s not the oversized trouser suit’s first time on the catwalk. What feels new now, though, is the range of both earthy and vibrant colours it’s showing up in. How these suits are being styled feels fresh too: with square-toed flats or white running shoes à la Hailey Bieber, for example, or with perfectly-colour-coordinated overcoats and shirts, which we’ve seen on everyone from Julia Roberts to Zendaya. Sometimes there’s no top at all—or there’s just a triangle bra, as shown at Stella McCartney. “The key is the styling,” says Gordon-Smith. “This isn’t about neat silhouettes and heels; it’s soft volume, a relaxed edge and smart sneakers all the way.”

Best of all, the season’s comfort-first suiting is an effortless workwear option that will impress while also easing the transition back into the office world and redefining power dressing for a new era of work in the process. “Trouser suits kind of take care of the ‘What am I going to wear?’ question,” says Palmer. “You have an ensemble that’s complete.”