Raw Mango is a testament to Sanjay Garg’s ability to take handmade Banarasi brocade and silk, and turn them into the most luxurious saris, lehengas, and kurtas, tailored to meet the needs of today’s modern traditionalist women. It’s also not out of the ordinary to think that these works are, if not limited to, mostly consumed in the northern part of the country. Because that sort of reverence is reserved for the Kanjeevaram silk in the South. While no designer would ordinarily foray into such geography whose social fabric is spun with heritage silk threads of its own, that thought never seems to have deterred Sanjay from opening his flagship store in the capital of Tamil Nadu, Chennai, in June this year. “I respect the culture of wearing Kanjeevaram. I am not competing with it. You may say, “I am wearing Kanjeevaram for my wedding,” but there are other events too, and that’s where I fit in,” says the designer with the kind of self-assuredness that is hard to come by in fashion. 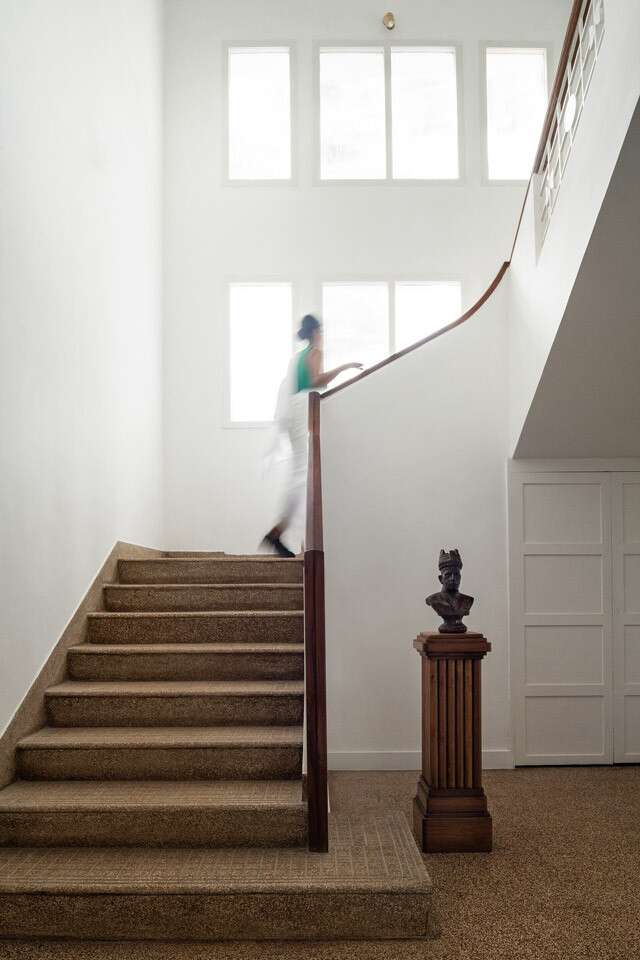 For Sanjay, Chennai is the cultural capital of the country. To him, the city is replete with heritage, moving toward the future yet rooted deeply in its culture, much like his brand. Somehow the idea of having a store there – that is if you can even call the building that would rather be someone’s house, that – makes complete sense. In fact, it was a house, built a few decades ago and left unused for a couple until Sanjay Garg found it. “We looked at around 70 buildings. But when I walked into this one, I knew this was Raw Mango,” says Sanjay about the Art Deco-inspired structure sprawling 5,400 sq. ft., across two floors, and his biggest flagship yet. It’s also interesting that barring a few necessary structural changes, he’s left the building characteristically untouched. The mosaic floors, the wooden doors separating one room from the other, and old school window grills, all left unchanged, are typical of houses in the Southern part of the country. What he has done, though, is inject the space with tokenisms of the Portuguese architecture that has influenced the culture in the city. Namely, its churches, and especially the Santhome Cathedral Basilica situated in Chennai’s Mylapore district. 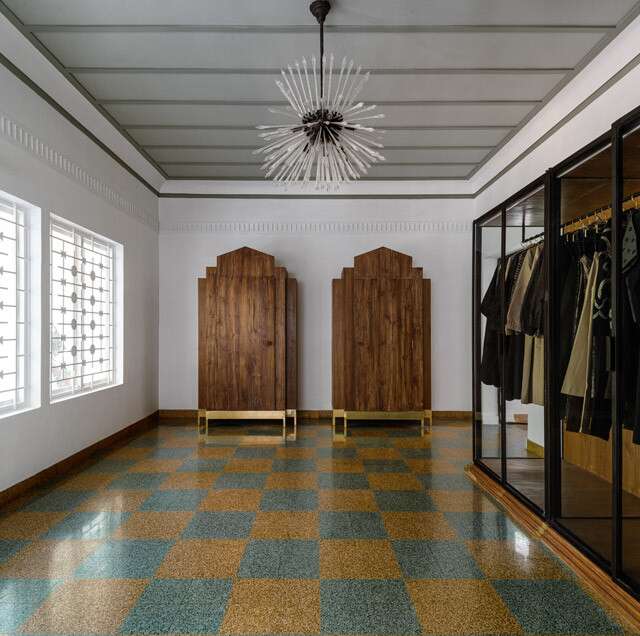 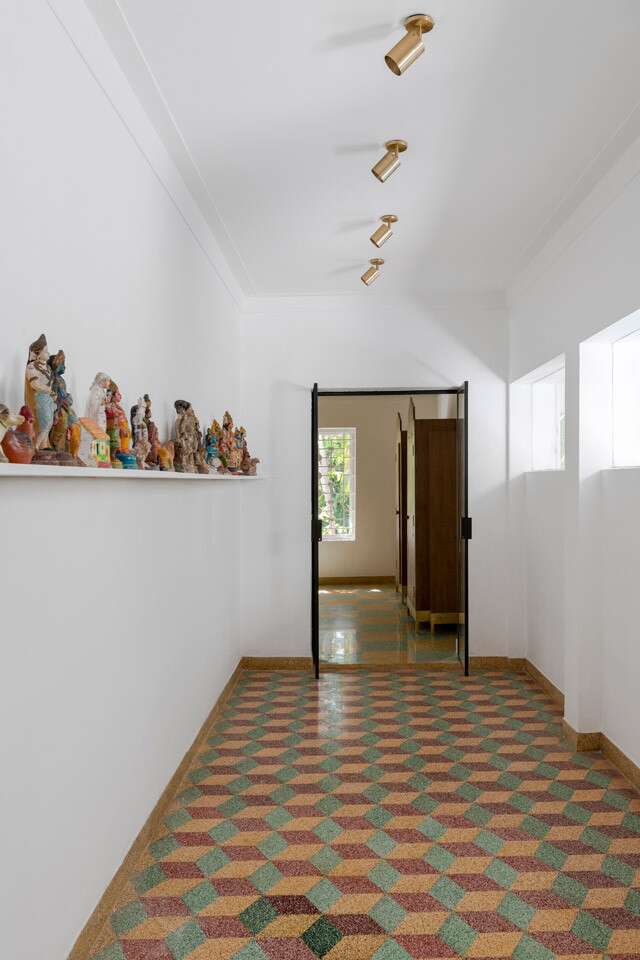 “Whenever I am in the South, I go to the churches,” says Sanjay – clearly an inspiration for the interiors of his store. In fact, when you enter Raw Mango, you’re greeted by an effigy of an apostle perched atop a pillar in the middle of the floor. We glean from the brand’s visual creative director, Adityan Melekalam, that the antique – and all of them that you will find scattered across the store – are from Sanjay’s personal collection that he has cherry picked from across the world on his travels. The effigy looks into a mirror with a triangular top, drawing from the cathedrals. Church tower-inspired shapes make their appearances in multitudes of ways – from sculptures to wooden wardrobes that hold all of Sanjay’s creations in his trademark colour-coordinated manner. 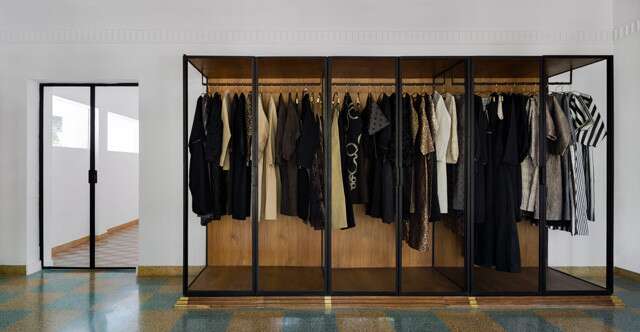 Of the 10 rooms that makeup the building each one brings its own characteristic appeal. Not only in terms of what the room stores — saris, kurta sets, and lehengas – each stored in a different one, but also in terms of how they look. Some showcasing typical Tamilian style of architecture, while the others bearing semblances of Chennai’s catholic influence, all housing clothes that have the fingerprints of Sanjay’s work, that are created with karigars across Rajasthan, Madhya Pradesh, West Bengal and Varanasi. “That is the new India,” says Sanjay, referencing the cultural mishmash that one can see in his new space. His plans for the future? Finding 3 to 4 more cities where he can have his stores and stock them with the art he creates using his favourite medium, textiles. 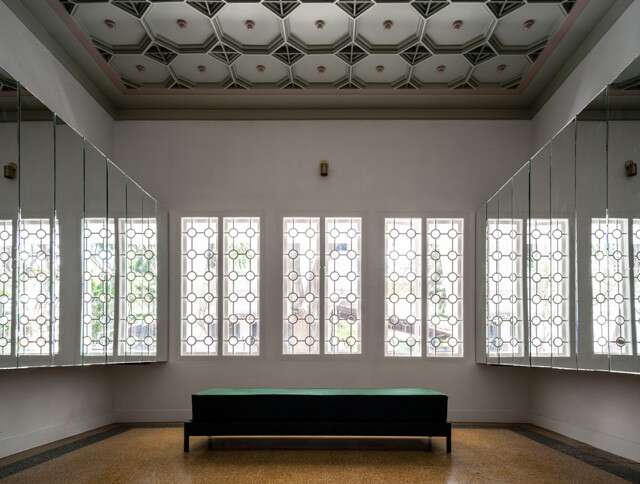