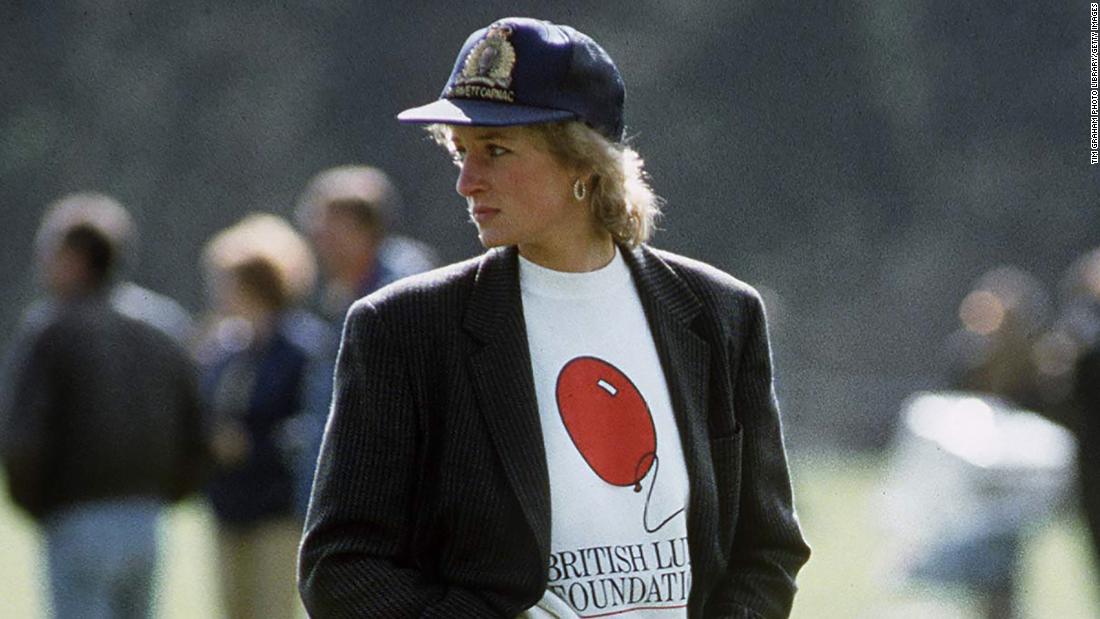 Twenty-five years after her death, Princess Diana’s wardrobe continues to inspire new generations. From TikTok users painstakingly recreating her workout outfits to fashion fans sourcing cult items worn by the late royal, her style remains as influential as ever, sparking magazine photoshoots, designer runway collections and reissues of her beloved pieces.
Recent movies and TV shows such as “Spencer,” “The Crown” and the HBO Max documentary “The Princess” (HBO Max is owned by CNN’s parent company, Warner Bros. Discovery) have reignited interest in Diana, introducing her — and her story — both to millennials, some of whom may be too young to remember her, and Gen Zers, who were born after her death in 1997. With “The Crown” in particular, costume designer Amy Roberts’ painstaking attention to detail went as far as consulting with David and Elizabeth Emanuel, the original designers of her iconic wedding gown.

However, as with the Netflix series’ reinterpretation of that bridal look — which saw actor Emma Corrin swamped by the gown’s heavy 25-foot train, amid ominous music and eerie snippets from the British media’s coverage of the wedding — there has been a shift in the way we perceive Diana’s wardrobe today. While the fascination with iconic outfits, such as her famed Christina Stambolian “revenge dress” (pictured above) or the blue velvet gown she wore to the White House in 1985, remain utterly timeless, younger generations are absorbing her looks in the pursuit of specific aesthetics.

Scroll through Pinterest, Instagram or TikTok and you’ll notice a particular part of Diana’s wardrobe has established newfound popularity amongst Gen Z: sporty, laidback outfits from the ’80s and ’90s — the type she was often photographed in while visiting the gym or attending polo matches. The quintessential ensemble includes an oversized sweatshirt, cycle shorts, chunky sneakers, sunglasses, vintage earrings and a designer bag, an effortless juxtaposition of streetwear, athleisure and glamour in a single look.

“My strongest impression of her style was bumping into her at the Harbour Club,” British designer Amanda Wakeley recalled in a 2020 British Vogue retrospective of Diana’s style. “She was in her exercise kit and she’d thrown on one of my cashmere sweatshirts with the satin cuffs on it. To me that was such a perfect image of her.”
In a much-referenced 2019 fashion spread for Vogue Paris, Hailey Bieber paid homage to the trend in logo emblazoned caps, university sweaters and large pearl and gold earrings. “All credit and inspo to the amazingly beautiful and iconically stylish Princess Diana who I’ve looked to for style inspiration for as long as I can remember,” Bieber wrote on Instagram alongside a selection of images from the shoot. “Thank you for leaving behind such an iconic fashion and style legacy.”
On Instagram, popular figures like Stephanie Yeboah, Melissa Soldera and Liv Phyland, among others, have also followed suit by recreating Diana’s style. “We love an outfit that promotes style as well as comfort,” Yeboah told CNN of Diana’s workout wear, noting that changes to her fashion choices appeared to reflect her growing sense of self-esteem.

“That growth in confidence being reflected by your wardrobe is something I resonate with immensely, being a plus size person and slowly seeing a change in my (own) wardrobe after getting the confidence boosts I needed,” Yeboah said in an e-mail.

And on TikTok, users like Taylor Hage have shared tutorials on how to recreate particular outfits. A recent video from Hage focuses on a much-referenced outfit worn by Diana to the Guards Polo Club in Windsor in 1988.

Another of Princess Diana’s outfits frequently copied on social media is this one — a sweatshirt from the British Lung Foundation (an organization for which Diana was a patron), oversized blazer, and baseball cap, which she wore to a polo match in 1988. Credit: Tim Graham Photo Library/Getty Images

“We’ve all seen this Princess Diana look,” Hage tells her audience of 1.6 million followers, before offering her interpretation thereof — straight leg jeans, a neutral crew neck sweater, blazer (“if you don’t have one, thrift one, borrow one from your Dad, borrow one from your brother, boyfriend, whatever,” she says, “it’s essential”) and Western boots.
Others have gone further still, with TikTok user @simplesmurf setting up a self-proclaimed “Princess Diana Stan acc” — in other words, a fan account dedicated to her. Alongside a plethora of vintage-inspired videos, the user reveals a tranche of sweaters and other separates worn or inspired by Diana, while sharing periodic updates about recent finds from thrift stores and vintage clothing sellers as they build out their collection further.
Amid this growing nostalgia for ’80s fashion and pop culture, thanks in part to shows like “Stranger Things” and throwback designs from luxury brands like Chanel, it comes as little surprise that Diana’s wardrobe has attracted new interest. For fans of the era such as TikTok’s @simplesmurf, who refers to Princess Diana as “the blueprint,” the princess’ outfits are a form of fashion history. “What an icon,” the user writes in a recent post.

Princess Diana pictured in 1994, dressed in a blazer, cream turtleneck and trousers. Social media users have aimed to recreate the effortless elegance of Princess Diana’s outfits, citing looks such as these as inspiration for ‘old money’ fashion looks. Credit: Tom Wargacki/WireImage/Getty Images

Elements of Princess Diana’s wardrobe have also been absorbed into what TikTokers refer to as the “Old Money” aesthetic — a tongue-in-cheek, aspirational style blending vintage and preppy pieces that seeks to emulate the wardrobes of those born into wealth and privilege. Princess Diana was perhaps the ultimate “Sloane Ranger” (a British term referring to London’s Sloane Square neighborhood and the stereotypically upper-middle-class women who typically live there), making her a natural fit for “Old Money” Pinterest boards and style inspiration videos.

Pieces that exemplified how Diana challenged the British royal family’s traditional mold — in particular, during the years after her divorce from Princes Charles — are also resonating with fashionable young people looking to assert their individuality.

Speaking to CNN last year, fashion researcher Eloise Moran explained the power of Diana’s “revenge dress,” which she wore the same day Prince Charles admitted to adultery. “I think that was the line drawn where she was in control, and she was showing that to everybody,” Moran said. “You can truly make people afraid of you — or intimidated by you, or respect you, or whatever it is — through clothing.”

Another outfit that has made renewed waves in recent years is a firetruck red knit sweater, featuring a pattern of white and black sheep, that Diana wore to a polo match In 1980. Widely interpreted as a subtle message that she felt like an outsider — or the “black sheep” — the sweater was given new life when clothing brand Rowing Blazers approached its original designers, the heritage label Warm & Wonderful, to relaunch the piece in 2020.

This red knit sweater, originally created by Warm and Wonderful and worn by Princess Diana in 1980, was recently re-released by the brand in a collaboration with Rowing Blazers. It soon went viral, and promptly sold out. Credit: Tim Graham Photo Library/Getty Images

At the time, Rowing Blazers’ creative director Jack L. Carson told CNN that sales translated to “three months of sweaters in an hour and a half” after the item went viral online. (The original sweater sits in the permanent collection at the Victoria & Albert Museum in London.) The pattern has since also appeared on tea towels, suitcases and vests.

The enduring fascination with Diana’s wardrobe has also been seen on the runway. The late fashion designer Virgil Abloh, for example, cited the late Princess as his muse for Off-White’s Spring-Summer 2018 collection. Staged in 2017, to mark the 20th anniversary of her death, the show featured Abloh’s takes on some of her most striking “off-duty” looks, including references to specific outfits including a denim jumpsuit and white cowboy boots, ’80s-style polo shirts, her staple cycle shorts and oversized blazers.

A patterned white top worn by Princess Diana in 1983, reimagined by Virgil Abloh as a look in Off-White’s Spring-Summer 2018 collection. Credit: Getty Images

“She was a strong individual that despite her position had her own personal taste,” Abloh told British Vogue in a 2017 interview, “and it came out through the clothes.” (That same year, fashion search platform Lyst wrote in its annual trends report that Diana’s “style choices influenced us all over again,” reporting spikes in searches for her wardrobe staples.)

“Her personal taste was very out of the way from what she was supposed to wear. It’s an inspiration,” he said.