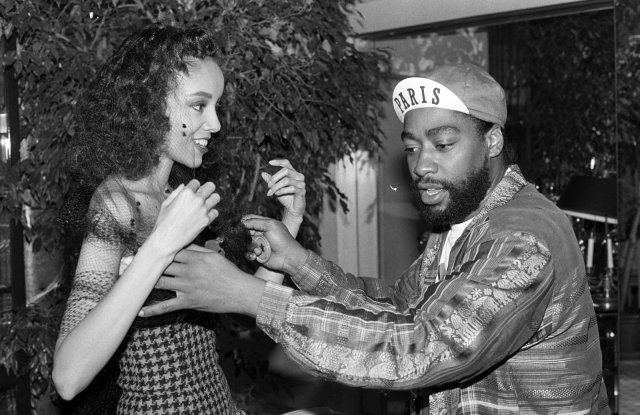 Editor’s Note: Throughout this week WWD is looking back through the Fairchild Archive at some of the designers it has interviewed and profiled through the years, accompanied by photos of their collections. On Tuesday, the series features two: This Jan.15, 1988, interview with Patrick Kelly in Paris and an Oct. 16, 1968, interview with Giorgio di Sant’Angelo in New York. (An explanation: The article has been reproduced using WWD’s style at the time, which leaned heavily toward all-capital letters, ellipses and bold-faced type.)

PARIS — When Patrick Kelly sold the worldwide rights to his women’s ready-to-wear to Warnaco June 30, he took what he calls a vacation. The “vacation consisted of putting together a 65-piece couture collection and showing it in a whirlwind three weeks.

“They had to stop me,” Kelly says. “I couldn’t stop myself if I tried.” Even with the security of high-powered finance behind him, Kelly — who keeps a bed under his studio drawing table — works at the fevered pitch of someone who still pays the bills.

His playful, sexy rtw has received rave reviews from American customers ever since Bergdorf Goodman featured the cutout cotton knit tube dresses from his first collection in its Fifth Avenue windows two years ago.

The dresses instantly pegged him a fun designer. They were lighthearted and — for French apparel — not expensive. It’s a niche he’s trying to expand. “I know I’m known for giggly dresses,” he says, standing amid construction in his new showroom, “but I make everything.”

Today, Kelly is at a juncture many American buyers are watching closely. Warnaco has been able to smooth out manufacturing problems and has helped clear up sizing problems he’s had in the United States and Kelly has been able to broaden his range. The result is more sophisticated, diversified Patrick Kelly collection, but buyers are worried he may be losing sight of his customer and that the line is getting too expensive.

“Warnaco seems to be pushing him into better apparel,” says Sydney Bachman, vice president and fashion director at Bergdorf’s, New York. She says his spring-summer ’88 collection was high quality and “the best he’s ever done, but prices were as much as twice his usual range. “As good as it is,” she adds, “it’s not ready to go next to Ungaro and Valentino. It’s much more sophisticated, but also expensive for his very young customer.”

“Patrick Kelly is great because he doesn’t take himself, or fashion, too seriously,” says another retailer. “His future depends on how successful he is at continuing to be who he is.”

Since he started his business with partner Bjorn Amelan in 1985, sales of Kelly’s rtw have been meteoric — doubling each season, according to the designer. Yet the firm has never quite made it out of the red and was supported by Kelly’s freelance work with such firms as Benetton and Victoire, which is a better-price French rtw manufacturer. Mary Ann Wheaton, president ofWarnaco’s Patrick Kelly operations based in the corporation’s New York office, believes it will be profitable very quickly.

Linda Wachner, president and chief executive officer at Warnaco, expects Kelly’s worldwide wholesale volume will reach $8 million to $10 million in its first full year backed by Warnaco, up from $900,000 when Kelly financed the line himself. In the U.S., Kelly will ship $250,000 worth of merchandise this season.

“I’m thrilled with the U.S. volume,” says Wachner. “We didn’t start this to look for big dollars.”

“What is fantastic about a designer like Patrick,” Wheaton continues, “is that he has a tremendous feel for what is very new and refreshing but at the same time very, very marketable.”

As for prices, she notes that the Lycra spandex knit dresses for which the designer is known are not higher and his new sportswear is still less expensive than other European designers.

“One of his suits, at $700 retail, is less expensive than some French designers’ jackets,” she says. Kelly’s average prices range from $400 to $600 retail, she says, adding that this does not include some of the most expensive items — for example, a handsewn button evening dress that sells for $1,800 — or the least expensive, a $36 T-shirt dress.

Notes Wheaton: “There is no way Patrick will depart from those dresses. That’s what he’s all about. They’re Patrick, they’re fun.”

Indeed, Kelly says he just wants to have fun. Keenly aware of his image (“a Black American in Paris sells,” he muses), he has been uncannily successful at attracting attention. He jokes with retailers as he personally sells the collection and regularly invites fashion editors to have coffee with him.

His couture show, which he calls a “wink at couture,” was originally supposed to be a press party to celebrate the opening of the designer’s first boutique, according to Wheaton.“He was just going to do a few outfits, but it evolved into a collection,” she says.

Kelly has called himself a “country hillbilly” but despite the extra-large overalls he always wears and the down-home talk, he’s an astute marketer. He says he has no head for numbers — “can’t remember” his age, his company’s volume or how many brothers and sisters he has — but he can reel off with ease the fashion magazine spreads or covers that have featured him. And hisideas “come a mile a minute,” he says.

Widely copied for the buttons and bows that adorned the outfits and accessories in his first collection (even in the venerable haute couture), Kelly lets whimsy reign in his studio. His recent collection included straw hats with watermelon slice brims and chandelier earrings.

Lynn Manulis, president of Martha, Inc., found his couture show — including an orange and black houndstooth suit and orange-dyed lynx hat — so innocent and refreshing that she flew the collection to New York to sell in her boutique in September. The weekend stint drew a younger customer, Manulis says, and sales of about $80,000. The wedding dress was sold three times.

For Kelly, who used to hang around outside looking into the store through the windows, selling in Martha’s was a “dream come true.”

Kelly grew up in Vicksburg, Miss., and became enamored of fashion at age 6 when he saw his first fashion magazine. “I knew what a Sears catalog was,” he says, “but this was something different.”

He attended Jackson State University where he studied art history for a couple of years before moving to Atlanta in the mid-Seventies. There he worked for a tailor while selling the clothes he made in the back room of a store.

At the urging of a friend, he moved to New York and attended Parsons School of Design for a year. Kelly eventually left for Paris, using a one-way ticket that was anonymously donated. He landed there in 1979, without a franc, and went out at night with former model Toukie Smith and friends.

By day he had a few enterprises going, including catering fried chicken and selling his clothes on the sidewalks of Boulevard St. Germain. He also made snug, slinky dresses for friends — many of them mannequins — who slipped their orders and money under his door. It was this exposure that launched him. An editor of a fashion magazine visited him based on what she’d seen on the models and did a six-page spread. He and Amelan, a former photographers’ agent, quickly set up shop.

Kelly likes to count Bette Davis and Grace Jones among his customers but says he still makes clothes for the young woman with a fashion addiction she can’t afford. “I started out making fashion fun and affordable and I still want to,” he says.

“Patrick was the first to break the equation between expensive and designer,” Amelan says. A cotton pique suit with embroidered bows from his most recent collection, for example, sells for $450, but the same suit is also available without the bows for $300, and a kit of attachable bows is sold separately for $45.

“I also did some funny T-shirt dresses with buttons printed on them that sell for $36 at retail,” he says. Yet he says his prices have created a dilemma in stores that departmentalize by price. He wants to be on designer floors. “I don’t want to be in junior zoom departments,” the designer says. And, according to Wheaton, Kelly’s sales are strongest on designer floors.

“There is no question sales are best in designer departments,” she says. “The dedicated designer customer doesn’t shop seasonally, the way her mother did. She is constantly in that department looking for new merchandise.”

On a recent tour of stores, she adds, “I observed people wandering through designer departments to get ideas. They want something fashion forward and sexy but can’t necessarily afford it, then they trip over something with a French label they can afford; therefore we sell.”

Kelly says Warnaco gives him credibility. “I wasn’t happy with the way it was going,” he notes, referring to problems on every level with Ghinea, the Italian company that previously manufactured the line. Since Warnaco took over, the line is made by the French firm Chofflet, based in Moulin.

In February, Warnaco will launch an ad campaign in the U.S. but will spend most of the promotions budget on informal modeling and trunk shows in targeted stores,Wheaton says.

She predicts that in three years the U.S. will comprise 75 percent of Kelly’s business: “It’s normal that the major growth would come from the U.S.”

She notes, “Patrick’s prices are affordable, the fashion is forward but comfortable, and we will deliver six times a year to keep new merchandise in the stores at all times.Growth will come quite naturally.”

Kelly has been approached by manufacturers, from patternmakers to jewelry houses, for licensing, according to Wheaton, but the company isn’t close to signing any new deals.“For this first year our primary concern is to get the collection produced properly, shipped properly, delivered well and sold through.” Kelly already does a fur license for Copenhagen-based A.C. Bang.

Meanwhile, Kelly is leaving the marketing to others, and when he’s not designing his own line, he typically has several other projects about which he’s equally enthusiastic.

He still freelances for other companies and would like to arrange to work for his favorite designer, Madame Gres (“I’d pass pins to her, he says). He’s also putting together a cookbook — his own recipes and those from his mother and grandmother — and is planning to open a doll shop (he has a collection of more than 5,000 Black dolls).

Kelly plans to continue to make made-to-order clothes but will work outside the structure imposed by the Chambre Syndicale de la Haute Couture. His next collection, to be shown in January, will be composed of only 13 outfits, “everything a woman needs for her summer wardrobe,” he says.

He admits his show in July ruffled feathers at the Chambre. “They thought I was making fun or spoofing couture. But I wasn’t,” he says. “I was just having fun.”