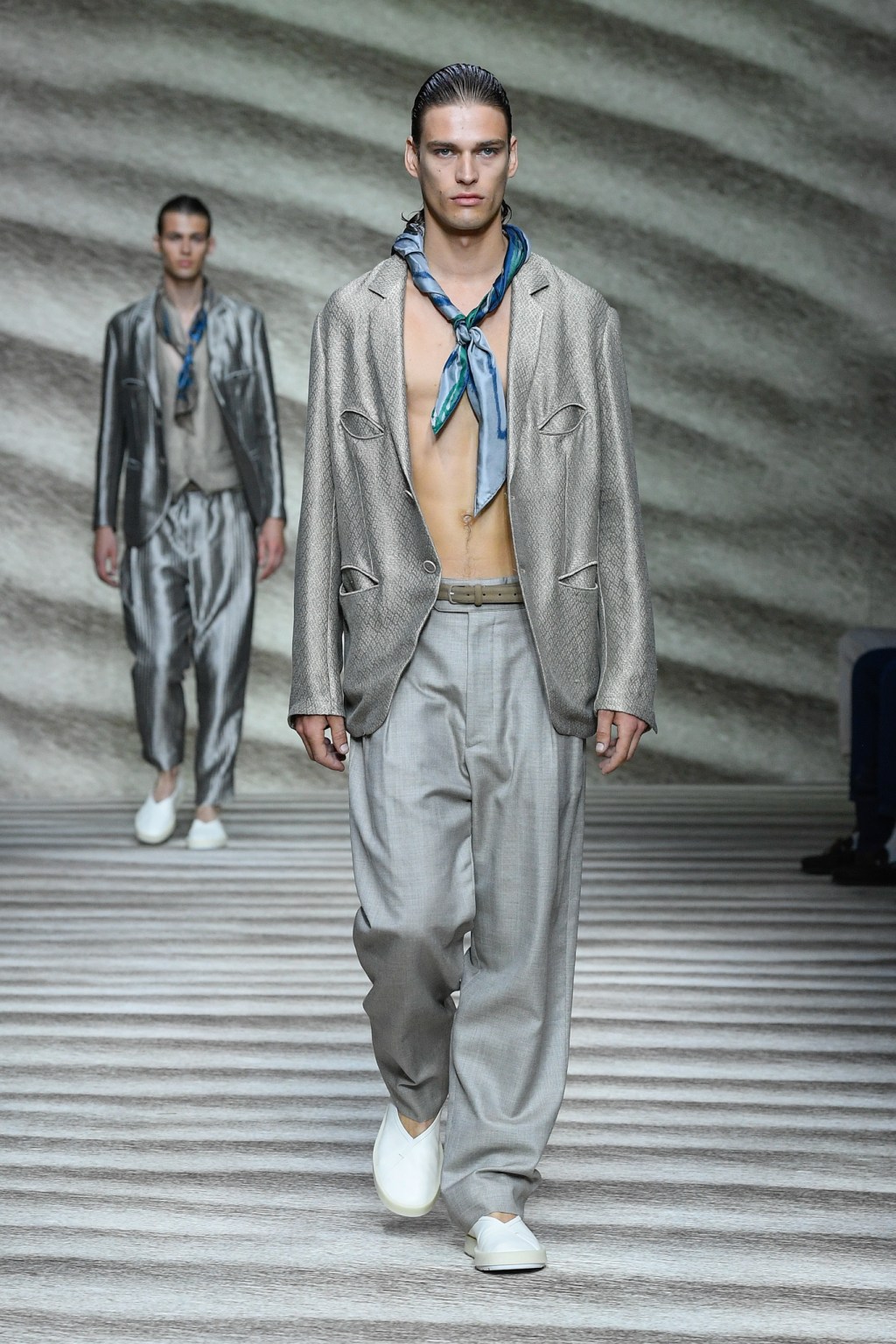 A relaxed suit silhouette, mostly shown without a shirt, featuring a soft shoulder construction and worn over voluminous, flowy, pleated pants emerged as the key tailoring trend for the spring season.

Mr. Armani, the originator of this softer look, delivered a powerful Giorgio Armani collection full of lightly tailored suits perfect for the summer seasons. The terrific sartorial display came with white, beige and black coloring and some were so lightly constructed that they resembled pajamas. Backstage after the show, Armani said he wanted to show “classic pieces” styled in a new way. Mission accomplished.

Young designer Hed Mayner presented a gender-fluid collection that included a new and youthful take on the traditional suit. This new sartorial option complemented his play of proportion from the other sportswear pieces and outerwear options. “The proportion is about removing the class, gender, status, whatever,” Mayner said backstage, who maintained it’s not really about being feminine or masculine. His inclusivity effort resulted in one of the most directional suits of the season.

American designer Mike Amiri’s spring collection warranted a thumbs-up: a confident new take of American classics, artisanal patchwork designs and some of the lightest suit constructions of the spring 2023 season. Double-breasted blazers were so featherlight that they could be tucked straight into the waistbands of trousers. Some of the pants themselves were convertible, with buttons running up the side that could be undone “to fit over sneakers,” Amiri said backstage, adding to the modern sartorial feel of the effort.

“What do men need today? And how can we evolve tailoring?” Ermenegildo Zegna’s creative director Alessandro Sartori wondered in a preview walk-through with WWD before the show. The result was a range of super light suit shapes in dusty colors, including soft pinks and light oranges, with traces of activewear and workwear details. Other sartorial pieces included kimono-cut jackets, ethereal coats and double-breasted blazers, some with shirt-collar details instead of lapels. Sartori’s journey of sartorial discovery has been one of experimentation and innovation, and his influence is apparent.

Other trend highlights included: leisure inspired summer suits at Hermès in gelato tones; Kim Jones’ new take on his signature side-buttoned Tailleur Oblique, with softly constructed suit jackets featuring a layered lapel that resembled a pair of buttoned sleeves, and the effortless elegance of the ultra-thin cotton suits at Officine Generale. All presented a modern take on the men’s traditional staple.