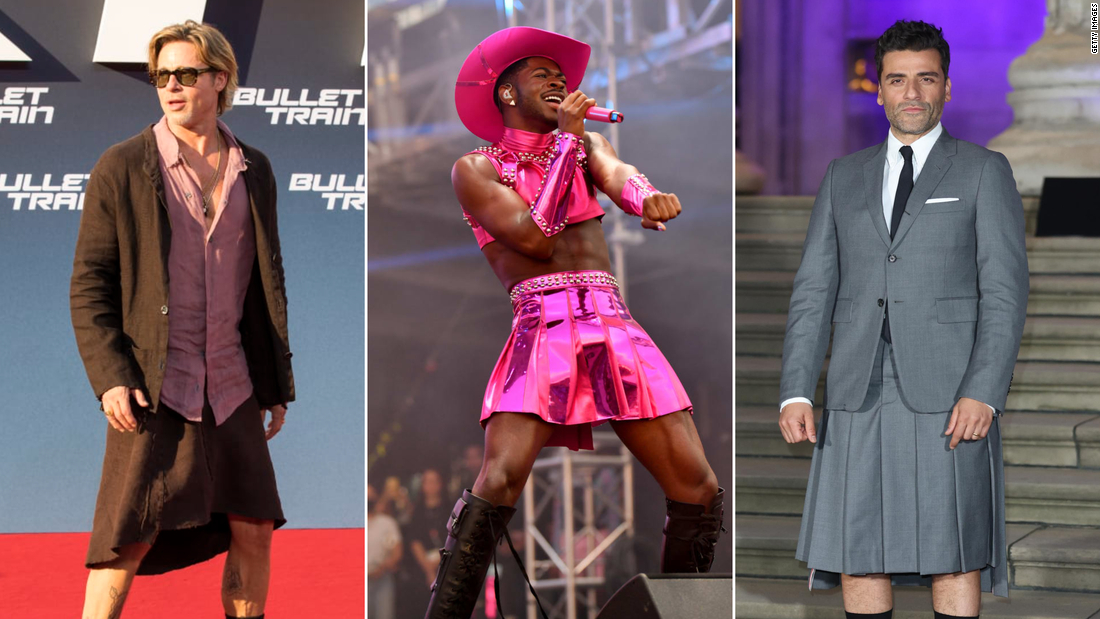 When Brad Pitt arrived at the premiere for new movie “Bullet Train” last month, his laidback linen outfit made headlines everywhere — or part of it did, at least. The actor, who is known for hypermasculine roles in films such as “Fight Club” and “Once Upon a Time in Hollywood,” completed his blush pink-and-brown ensemble with an eye-catching twist: a skirt.
“I don’t know!” Pitt later told Variety magazine of the inspiration behind his wardrobe choice. “We’re all going to die, so let’s mess it up.”

Outside Hollywood, the phenomenon has been gaining traction for years, according to Carl R. Friend, the administrator (and self-described “Master Barista”) of The Skirt Café, an online forum dedicated to men’s skirts. While he believes “undue” attention is being paid to skirt-wearing celebrities, he nonetheless welcomed the increased visibility.

“It is what it is,” said Friend, whose interest in skirts dates back to the 1980s, over email. “And if it engenders an acceptance of skirts on guys, then I suppose it’s for the better.”

Although skirts are now commonly associated with womenswear, men have worn them at various points in history. Pleated fustanellas, for example, can be seen on ancient Greek and Roman statues, while more contemporary versions have since been worn in Balkan countries like Albania, which considers them a national costume. Tartan kilts have remained a staple of national pride for Scotland since they debuted in the 16th century, though today they are often reserved for special occasions.

In many parts of the world, however, men’s skirt-like garments are part of everyday wardrobes. The sarong, a typically bright patterned wrapped skirt, is worn by men in cultures across Asia, the Middle East, Africa and the Pacific islands. Variations of the sarong such as the “sulu,” a wraparound style used in both casual and as formal settings in Fiji, and the “lungi,” which is worn in south and southeast Asia, remain popular styles for men of all ages.

Soccer star David Beckham was famously photographed wearing a patterned sarong in 1998 (he was teased in the media at the time, though later said in an interview, “That’s one thing I never regret because I thought it looked great and I would still wear it now.”) But in much of the Western world, tastes moved away from loose-fitting menswear in the 18th century, Friend said.
“We still labor under dicta originating from the Industrial Revolution — long flowing garments and high-speed machinery don’t mix all that well,” he said, while also pointing to the impact of the French Revolution, which saw the country’s taste for flowing, flamboyant brocade textiles eschewed in favor of nationalistic colors and practical, form-fitting clothing.

“The French Revolution … had a dramatic ‘dumbing-down’ of male attire as compared to, say, the Renaissance,” Friend added.

In recent years, evolving conversations around gender and identity have instigated a collective reckoning about what it means to dress like a man. Gen Z and younger millennial stars, such as Harry Styles and Lil Nas X, regularly bring elements of femininity into their wardrobes — and retailers are taking notice. Online stores like ASOS, Mr Porter, Cettire and SSENSE are among those now stocking men’s skirts, many of which would be indistinguishable from womenswear designs were it not for the male models.

On TikTok, meanwhile, the hashtag #boysinskirts has been viewed over 240 million times, with male users sharing their outfits and style advice.

On his Instagram account @theguyinaskirt, style blogger Shivam Bhardwaj shares joyful videos and photos of himself wearing skirts — of all colors and styles — with his audience of over 22,000. He said that while much of the media attention surrounding the trend has focused on straight male stars, members of the LGBTQ community have long been wearing skirts — and have even been ostracized as a result. In 2020, US talk show host Wendy Williams apologized after imploring gay men to “stop wearing our skirts and our heels” on her show, while this year, a gay man in a skirt was reportedly attacked in the UK after attending a concert by singer Yungblud — an artist known for his gender-fluid style.

“People don’t celebrate men in skirts as much they celebrate heterosexual creators or celebrities,” Bhardwaj said over email. “It makes me a little sad that people don’t acknowledge that men from (the LGBTQ) community have been wearing skirts for many decades, and we have played a major part in breaking this stereotype.”

The fashion world has also been helping to normalize male skirts, with designers such as Dries Van Noten and Raf Simons sending men down their runways wearing them in recent years. A pleated gray kilt by Thom Browne (the aforementioned design worn by Oscar Isaac, Dan Levy and “The Hobbit” star Lee Pace, among others) has become something of a celebrity favorite, with the American designer turning traditional menswear tailoring on its head through his unexpected silhouette.

“Skirts or any piece of clothing doesn’t describe your gender,” said Bhardwaj. “Clothes are made to express your feelings to the people out there in the world.”

Friend, who is married to a woman, also hopes to debunk the idea that skirts are tied to specific gender identities or sexual orientations, saying “lots of folks make incorrect suppositions about that.” The Skirt Cafe’s users form “a community that is unwilling to relinquish or renounce our masculinity” for simply wearing skirts, he added.

The online forum’s members tend towards more basic skirts, Friend explained, with denim and shorter styles among the most popular. Users also share styling advice and their favorite new finds, while the site also hosts a list of male-friendly skirt brands. Recent recommendations have included custom fleece-lined winter skirts by Virginia label The Mouse Works and a builder’s kilt by Scottish workwear label Blaklader: a black, heavy-duty cotton design featuring all manner of pockets for hammers, screwdrivers and other tools.

Nevertheless, gendered stigma makes wearing skirts in public a daunting prospect for many men, and those who do remain in the minority. Friend’s fascination with the garments began in the mid-1980s, when he saw a man on a train wearing a long white skirt. For a long time, he felt hesitant about incorporating skirts into his daily wardrobe due to his job in a “high-visibility customer-facing role.” He eventually took the plunge in 2002, when he made his own miniskirt from some of his wife’s scrap fabric.

“The first time I worked up the guts to go outside I was hooked on the idea because it was the first time I’d actually felt a breeze on my legs in decades,” he recalled. “I commented to (my wife), ‘I’ve been cheated all these years.’ She grew to not only accept it, but embrace it, as all of a sudden, I actually started caring what I looked like.”

Bhardwaj said that wearing skirts has become more socially accepted, adding that the response to his account had been “very overwhelming” and resulted in “so much love from all over the globe.” The fashion blogger, who now owns over 100 skirts, hails from what he describes as a “lower-middle-class” Indian family that has often been questioned his style choices. His interest in skirts came about when he bought one for a female friend and decided to try it on before posting a video of him wearing it to social media.

“That skirt literally changed my life and has helped me to express myself in the best possible way,” he said. And while Bhardwaj said Indian society has a “very long way to go” when it comes to accepting men in Western-style skirts, he has been complimented on the street where he lives in the northern Indian state of Uttar Pradesh. He is happy to wear his outfits in daily life, not just on social media.

“I literally thought that no one would ever accept me in my skirts, but people have proved me wrong and they have accepted (me) with open arms,” he said.