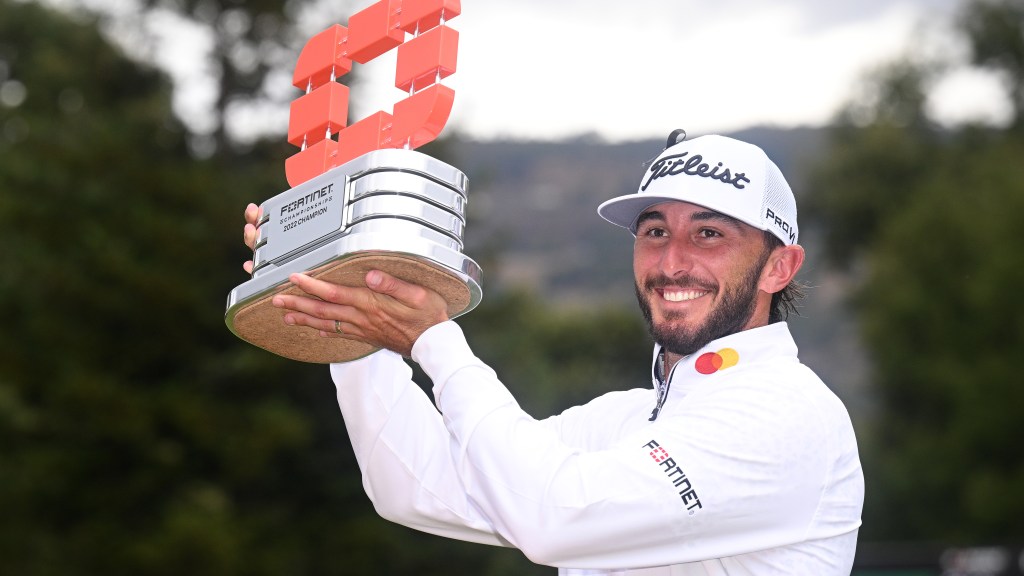 Max Homa defended his title at the Fortinet Championship in stunning fashion.

Trailing by one stroke on the final hole, Homa chipped in for birdie and watched in amazement as leader Danny Willett took three putts from less than 4 feet.

Neither could Homa, who closed in 4-under 68 at Silverado Resort’s North Course in Napa, California, and signed for a 72-hole total of 16-under 272.

“The last three minutes are kind of a blur,” Homa said.

Willett built a three-stroke lead early in the final round with birdies at Nos. 1, 4 and 8 but gave a stroke back with a bogey at the ninth. Homa put up a valiant effort to defend his title, making three straight birdies beginning at No. 9.

Homa’s chip in for birdie at 18 forced Willett to hole from 4 feet for the win. But it didn’t appear to be enough until Willett hit his putt too firmly and it lipped out. He missed the 5-foot comebacker to hand the trophy to Homa.

“That was a wild finish,” Homa said.

3 putts from 4 feet and Danny Willett loses by a stroke. pic.twitter.com/mfljIjUAOt

Rookie Taylor Montgomery shot a final-round 64 and finished alone in third. Justin Lower closed in 73, settling for a tie for fourth but notched his best career finish. Rickie Fowler, who tied for sixth, secured just his third top-10 finish in his last 59 starts.

Homa’s second shot at the par-5 18th caught the left green side bunker, leaving himself an awkward 30-yard shot from the sand. He left it 33 feet short of the green before holing out for the eventual winning birdie.

For the week, Willett had holed more than 96 percent of his putts from inside 10 feet, including a clutch 9-foot par putt at 17 to maintain his lead. But his first putt from 4 feet rimmed out on the left side and he faced a longer par putt to force a playoff than his previous attempt. Willett was attempting to win his first PGA Tour title since the 2016 Masters, but it wasn’t to be.

“Just a shame how I finished but that’s golf,” Willett said. “Yeah, we’ll live to fight another day.”

Homa heads to his first appearance representing the U.S. in next week’s Presidents Cup with an extra boost of confidence.

“I’m just happy to be in form, to represent my country, play with those boys. They’re some good golfers, so I just wanted to come in in form,” he said. “I know this is Twitter, but I’ve had a lot of people tell me if the LIV guys wouldn’t have left, I wouldn’t have made the Presidents Cup team, so I had a little bit of a chip on my shoulder this week.”