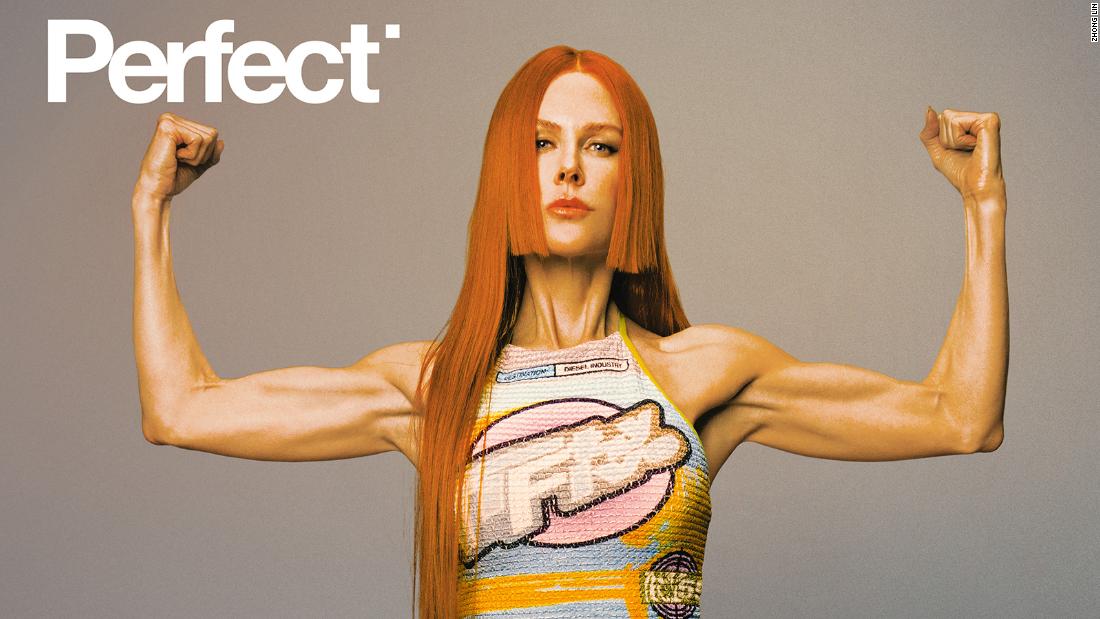 Featuring the good, the bad and the ugly, ‘Look of the Week’ is a regular series dedicated to unpacking the most talked about outfit of the last seven days.

Kidman, who turned 55 this summer, flexes her impossibly sculpted triceps on the magazine’s cover — a cascade of red hair falling over one shoulder with a section cropped bluntly at her chin. Not a power suit or black turtleneck in sight: Kidman is styled in pieces from fashion brand Diesel’s Autumn-Winter 2022 collection, which debuted at Milan Fashion Week this February — a highly praised array replete with Y2K-inspired trucker hats, denim trench coats and the buzzy belt-skirt Kidman wears.

A second cover shows Kidman in a colossal pair of patent thigh-high boots — similar to those spotted on Rihanna just last week — from Y/Project, a label that, like Diesel, is helmed by Belgian designer Glenn Martens. And throughout the 20-page fashion editorial, photos capture Kidman in a number of internet-breaking looks, including the infamous naked print dress and a double denim Diesel ensemble.

It’s all in celebration of a new accolade bestowed on her by the magazine. Dubbed as its “Perfect Icon” — one of 23 new awards launched in an attempt to spotlight industry talent across the board — Kidman is praised for her unrelenting curiosity and versatility.

“I make my decisions the way a teenager would,” she said in an accompanying interview. “Not playing out the consequences. I approach things like, ‘I want to do this, I’m gonna try it. It’s had its ups and downs. It actually makes for a really tumultuous career — which I’m into.”

This penchant for daredevil dressing has long given Kidman an edge in the high fashion space, too. In February, she appeared on the cover of Vanity Fair’s latest “Hollywood Issue” in the notorious Spring-Summer 2022 Miu Miu micro-skirt — a piece so prolific that an Instagram account now diligently chronicles every time it’s worn by an influencer or celebrity. (There have been 111 posts in six months.) The look is made all the more dynamic because Kidman “begged” stylist Katie Grand — also the creative director for the Perfect shoot — to wear the shorn chino skirt, the actor later told director Baz Luhrmann in an interview for Vogue Australia.

During Paris Haute Couture Week in July, Kidman joined Bella Hadid, Kim Kardashian and Dua Lipa on the runway to model for Balenciaga.

But the actor has long been one of fashion’s most astute risk-takers. In 1997, Kidman wore a chartreuse Dior dress made from embroidered silk to the Oscars. Designed by John Galliano, the look caused such a stir it now boasts its own dedicated Wikipedia page. The gown’s color was so heavily criticized by comedian and red carpet critic Joan Rivers (who told Kidman the hue was “making her puke” and allegedly made retching noises as the actor walked passed), some argue it helped create a culture of cautious red carpet dressing that endures today. “John (Galliano) made it for me, and I love it,” Kidman told Women’s Wear Daily at the event. “I don’t know if people will get it. But if they don’t, well, maybe they should.”

Tom Cruise and Nicole Kidman on the red carpet for the 69th Academy Awards in 1997. Credit: Vnice Bucci/AFP/Getty

Deeply intertwined with narrow beauty standards, fashion is often considered a young person’s game — with the expectations on what to wear growing evermore restrictive as you age. But Kidman said for her, fun takes priority over fitting in. “As I always say, ‘I’m gonna do what I want to do,'” she told Perfect. “That’s probably why I click with photographers, as I’m not here to stamp myself on you, but rather you stamp yourself on me and for us to grow together. Let’s play!”