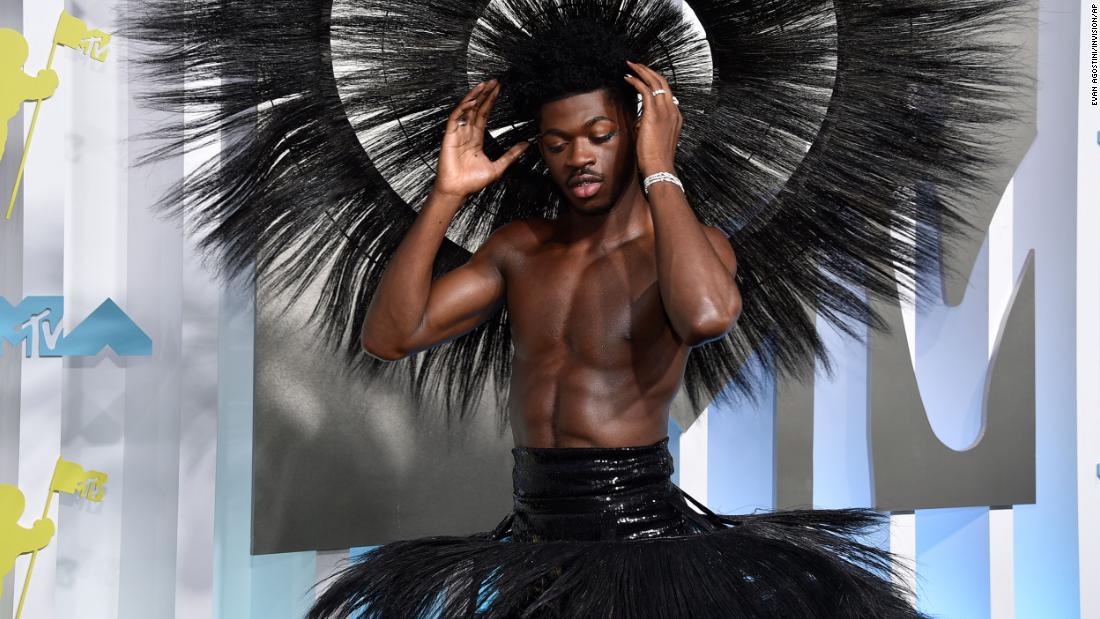 Amid the sea of celebrity ensembles on the MTV Video Music Awards’ black carpet, one outfit literally towered above them all. “Montero” singer Lil Nas X wowed in a bold sculptural outfit, baring his torso as he swished by in a feathered ballgown skirt frame and enormous headdress.

The singer’s outfit, one of the most artistic creations of the night, was the work of fashion designer Harris Reed. Known for his gender-fluid repertoire, Reed counts the likes of Harry Styles, Beyonce and Conan Gray (who also wore one of the designer’s looks to the event) among his celebrity clientele.

Reed had earlier shared on Instagram that Lil Nas X’s outfit came from a collection crafted from “upcycled materials and 100-year-old upholstery fabric” from an Italian villa. Each of the feathers featured in the black outfit was hand-painted, and Reed worked with designer Vivienne Lake on the gigantic headdresses.

The “Old Town Road” musician often blurs the lines between mens and womenswear with his gender-fluid wardrobe, donning metallic pink miniskirts and toile-patterned ballgowns. The VMAs outfit was among his most high-fashion looks to date — although it was seemingly one of the trickiest to wear, as he was seen holding up his headdress during an interview on the red carpet.

If the look was familiar, that’s because supermodel Iman wore a golden version of the outfit to last year’s Met Gala, where she accessorized with dangling earrings and bangles. Reed had also attended the event wearing one of his own feathered headpieces, paired with a white jumpsuit, later writing on Instagram that it had been his “biggest dream come true to date.”

Lil Nas X’s latest red carpet moment further cements his position as one of today’s most exciting style icons, having recently been appointed as Yves Saint Laurent Beauty’s US ambassador. Announcing the news over the weekend, he shared a video of himself smashing open a pinata in celebration as he thanked YSL on Instagram stories.

This year, Lil Nas X was nominated for seven VMAs this year. Of them, he won the award for Best Collaboration with rapper Jack Harlow, while the pair’s video won Best Art Direction and Best Visual Effects.