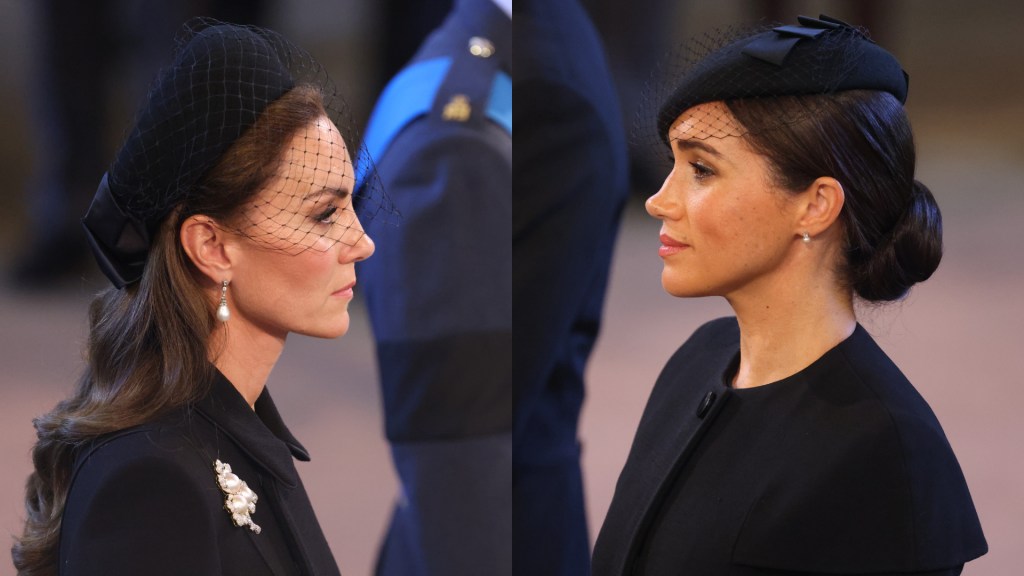 LONDON — Queen Elizabeth II’s coffin has arrived at Westminster Hall, where she will lie in state until Monday, the day of her funeral.

King Charles III, Prince William and Prince Harry followed the coffin on foot as it made its journey from Buckingham Palace to Westminster Hall, where other senior members of the royal family met them, including Camilla, Queen Consort; Catherine, Princess of Wales; Meghan, Duchess of Sussex, and Sophie, Countess of Wessex.

The queen died on Sept. 8, aged 96 at Balmoral, her home in Scotland, surrounded by her children and grandchildren.

For the procession, the queen’s coffin was draped with the Royal Standard flag, which features three gold lions for England, a red lion for Scotland and a harp for Ireland with the Imperial State Crown sitting atop, which has the Cullinan Il diamond, cut from the largest diamond in the world.

On Saturday afternoon, William and Harry put aside their differences to pay tribute to their late grandmother and to greet members of the public outside Windsor Castle. They were accompanied by their wives, Kate Middleton and Meghan Markle.

At Westminster Hall, Kate and Meghan paid respect to the queen with their jewelry.

The Princess of Wales wore a new Catherine Walker coat in black, of which she has a similar style in beige. She added the queen’s diamond and pearl leaf brooch to mark the occasion. Kate previously wore the brooch in Belgium in 2017.

Also in two soft nods to her late mother-in-law, Princess Diana, Kate wore her Collingwood earrings and pearl bracelet. She first wore the earrings to a Spanish state banquet in July 2017. The earrings were a gift to Diana on her wedding day from the company Collingwood, the family jeweler of the Spencer family.

Meghan opted for a Givenchy black coat that she first wore in 2019 on a special visit to the Association of Commonwealth Universities while pregnant. She accessorized the somber ensemble with a black Loewe postal bag and Paul Andrew black pumps, both of which she has worn before.

It’s understood that Meghan’s pearl earrings were a gift from the queen for their first joint engagement together.

The significance behind Kate and Meghan’s pearl earrings is that they were worn as mourning jewelry during Queen Victoria’s era.