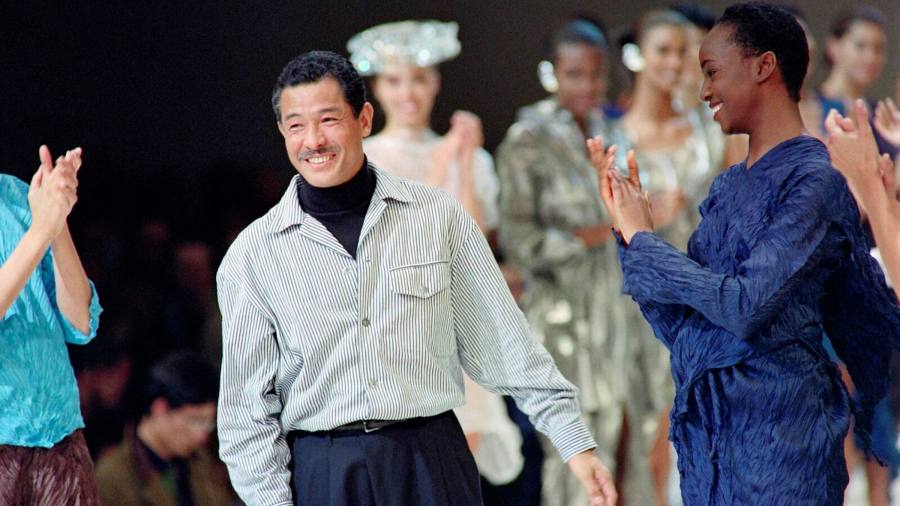 In 2014, the late architect Zaha Hadid explained her love of Issey Miyake’s clothes to the Financial Times, saying “when they are on show in the shop it’s one thing, but once you wear them, they become something else. They are animated.”

Steve Jobs was another famous fan who prized the marriage of form and function in Miyake’s designs — the founder of Apple first discovered the designer when he saw the uniforms he had created for Sony employees. Jobs’s staff rejected his idea of commissioning Miyake to create vests for them, but the designer did make the black turtleneck that became the entrepreneur’s signature look. Jobs told his biographer: “I asked Issey to make me some of his black turtlenecks that I liked, and he made me a hundred of them.”

Miyake, who died on August 5, aged 84, set up his label more than 50 years ago. It still has a loyal following, thanks to his clothing’s ability to make a statement while being easy to wear.

Worn by other well-known figures from Grace Jones in the 1980s to Meryl Streep and Kim Kardashian, Miyake is best known for his sculptural pleated garments. He fused the worlds of art and fashion, as well as the cultures of east and west, and the traditional with technical innovation. For his work, he was awarded the Order of Culture in Japan in 2010, and the French Légion d’Honneur in 2016.

Born in 1938, Miyake was seven years old when the United States dropped an atomic bomb on his home city of Hiroshima. He was generally reluctant to talk about the nuclear attack, so as not to become labelled as the designer who survived it. But in 2009 he recalled the event in an opinion piece in The New York Times, deciding it was his responsibility to discuss it. He wrote: “when I close my eyes, I still see things no one should ever experience: a bright red light, the black cloud soon after, people running in every direction trying desperately to escape.” Within three years of the blast, his mother died from radiation exposure.

He added that he tried “albeit unsuccessfully” to put the past behind him, “preferring to think of things that can be created, not destroyed, and that bring beauty and joy. I gravitated toward the field of clothing design, partly because it is a creative format that is modern and optimistic.”

Miyake studied graphic design in Tokyo, and moved to Paris two years after his graduation in 1963, where he worked as an assistant to Guy Laroche and Hubert de Givenchy. He witnessed the May 1968 student riots while there, which inspired him to create clothing for “the many rather than for the few”. After a period in New York, he founded the Miyake Design Studio in Tokyo in 1970, and within a couple of years was exploring with technical fabrics. He began showing his collections in Paris in 1973.

Miyake’s signature pleats began to take shape in the late 1980s when he experimented with a technique that involved pleating clothes after they had been cut, using a heat press to shrink them into the desired size, shape and texture. The finished garments can be washed and air dried without losing their shape.

He employed the method to make clothes for a production by the Frankfurt Ballet, in order to give the dancers freedom of movement, then used it for the Pleats Please Issey Miyake line which he launched in 1993. Another innovation, in 1998, was A-POC, or A Piece of Cloth, a new technique whereby a single thread fed into an industrial knitting machine could create tubular garments through computer programming — these garments could then be cut into customised looks.

Denis Bruna, chief curator in the fashion and textile department at the Musée des Arts Décoratifs in Paris, which holds 154 Miyake pieces, considers him “the designer who brought Japanese vision and techniques into western fashion. He innovated through materials and shapes, while using traditional techniques, in particular the flat cut commonly used in Japan where the garment only takes shape on the body. Along with Kenzō Takada he showed that it was possible to make a career in France.”

Fabien Baron, a renowned art director who worked with Miyake on the bottle for his bestselling fragrance L’ Eau de Issey Miyake, said of his friend, “For someone in fashion he was so humble . . . I learned long after we worked together that he witnessed the Hiroshima bomb, and I think he felt that life was a gift and tried to give as much as he could with his designs and his attitudes. His clothes gave a form of freedom, you could slide them on and just be.”