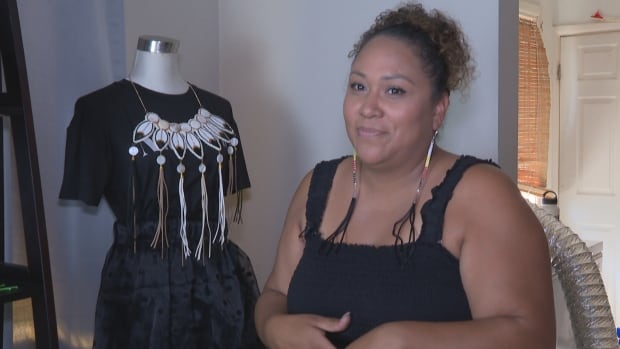 Melrene Saloy’s love for fashion began as a child, making clothes for her dolls after her grandmother and aunts taught her to sew.

After going on maternity leave, she decided she didn’t want to return to work in retail management. So, she founded Native Diva Creations and never looked back.

Saloy did her first fashion show in 2015 in Santa Fe, N.M., and last year, models wore her designs on the runway during New York Fashion Week (NYFW).

“I literally was crying the whole time,” Saloy said about her experience at NYFW.

“It was so hard for me to just sit there because it was like, ‘Look at my culture. Look at all of this just happening.'”

Saloy is one of several Indigenous fashion designers showcasing their work on national and international runways. She was recruited to bring her designs to Paris through the non-profit International Indigenous Fashion Week Inc. (IIFW).

The organization helps Indigenous designers make their way into the mainstream fashion industry and connect with each other.

Finally under the spotlight

Chelsa Racette, founder and executive director of IIFW, said she started the organization so Indigenous designers could have the spotlight and not be sidelined in fashion shows.

“I was working multiple fashion shows in the United States and Canada, and they would only feature one or two Indigenous designers. So I figured we need our own,” she said.

Since its founding in 2012, IIFW has taken Indigenous designers to fashion shows across the country and globe, including in New York, Paris and London.

Racette, who is Cree from the Nekaneet First Nation in Saskatchewan, said one of her main goals with IIFW is to bring Indigenous designers into mainstream fashion circles and network with other designers across the world.

“There’s been Indigenous designers around for a long time, and I think just people are catching on now,” she said.

We’re more than just beads and feathers…. We’re not just what you see at a gift shop. We’re so, so much more.– Melrene Saloy, Blackfoot fashion designer

“We finally have a nice point where there’s enough artists where we can say, ‘Hey, look, here we are. We’re here to stay. We’ve been here a long time. We’ve got a lot to show,” she said.

‘Healing through the threads’

Livia Manywounds, a member of Tsuut’ina Nation, brought her couture gowns to Toronto’s Indigenous Fashion Arts Festival in June. The experience was one to remember.

“It was one of those moments where I was like, ‘Oh my god, I’m really here with all these top and Indigenous designers. How did I get to be here, right?,” she said.

“Then I think back about my story, I’m like, ‘Wow, I really put in the work, the hours. It wasn’t easy being one person to create all these beautiful garments.”

Manywounds said she thinks of her journey into fashion design as “healing through the threads.” Her father passed away in 2016, and that same day her mother was diagnosed with cancer.

While sitting at her mother’s bedside, Manywounds got back into beading. After her mother died, she continued her art as a form of healing.

Manywounds said her work started to become popular online through social media, and she began to receive many orders. She credits those who supported and bought her early designs in helping her get to where she is today.

Indigenous designers getting to showcase their designs on the runway is important for historical reasons, Manywounds said, especially after the residential school system tried to rob Indigenous communities of their cultures, languages, traditions and beliefs.

“It’s not a costume. It’s something more special than that because it has meaning behind it. It has purpose. It has a story.”

Manywounds said there are now many influential Indigenous designers making their way into the mainstream and getting their designs on red carpets. She hopes the same will happen for her work one day and that more opportunities will open for Indigenous designers, models and artists.

As for Saloy, she hopes attending Paris Fashion Week will help get her name out to international buyers, but also start a larger conversation about Indigenous designers.

“I want to open those doors for other artists to get there, for them to see more Indigenous people.”