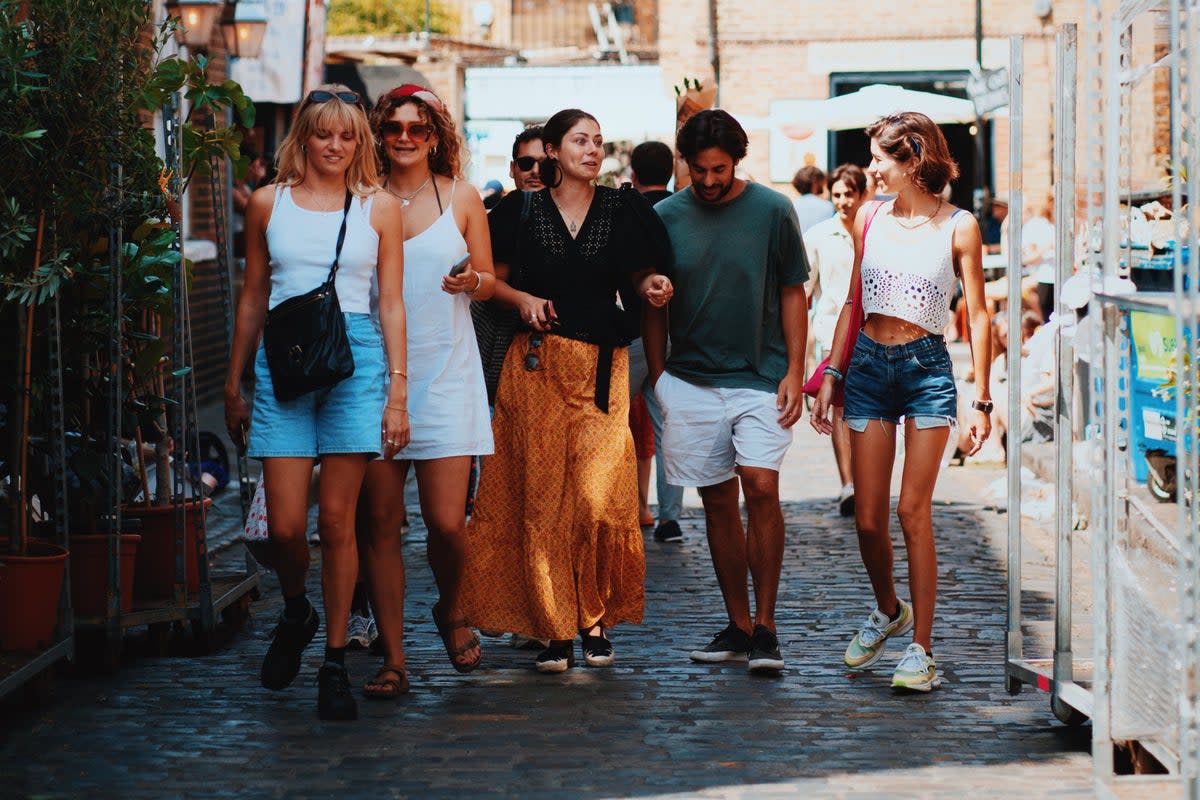 It’s Sunday morning. You wake up to the sun streaking through your window because you came home drunk last night and forgot to close the curtains. You check the time, uh oh, you’re running out of it – and you’ve got some serious getting ready to do.

There’s no sympathy for looking hungover where you’re headed. There’ll be photographers, designers, artists looking for their next muse, TikTokers asking you about your online dating profile, graphic designers doing the heavy lifting for their influencer girlfriends… and you: possibly still inebriated, but blow-dried and dressed to the nines all the same. Columbia Road, we’re on our way.

Runway shows tend to happen in New York, London, Milan and Paris on a biannual basis. But in recent years, an unofficial weekly catwalk has been brewing. The Hackney highway, otherwise known as the distance between London Fields and Columbia Road, has become the unlikely hotspot for the fashion pack, as well as those eager to be a part of it.

This summer especially – perhaps due to the rise of TikTok and now, begrudgingly, Instagram reels too – this particular stomping ground has become a weekly meeting point for all of London’s hot young things. They’ve pushed out the yummy mummies; the dungaree-donning home-renovation couples; as well as poor old Arthur who only wanted a new cheese plant.

Now, street style photographers stand at the entrance to Hackney City Farm. And whilst chickens strut behind them, peacocks flaunt before them. Headphones in, Beyoncé’s Renaissance on. Of course, once you’ve completed the runway you’re showered with bouquets of flowers. You cradle your peonies as if it’s closing night at the Royal Opera House.

‘What people are wearing in (insert city) today’, has become a popular trend on social media, with cities across the globe battling it out for the best dressed title. London is putting up a fight on TikTok, snapping candid shots of its best dressed residents against a backdrop of… you guessed it, the Hackney highway.

For east Londoners, it’s the Sunday service that you attend in order to see and be seen. It’s where you get your fill of weekly gossip, it’s how you know what trends are on the rise, but also, who’s dating who. If you’re a Bridgerton fan, this might sound familiar.

During the 18th and 19th centuries, promenading, or rambling, became a popular leisure activity for residents of the ‘ton’. Hundreds of years prior to social media, promenading was one of the few ways to catch the eye of society. Georgian and Victorian Londoners would exhibit the latest fashions and use this time to seek out potential marriage candidates. Two hundred years laters and we’re doing the same thing – just previewing our Hinge matches instead.

As with Victorian high society, there is a palpable sexual tension amongst these market dwellers. The thing about east London is that everyone fancies everyone. We’ll undress each other with our eyes but the unspoken rule is that you must never approach. We’re living in main-character-mode over here, if we actually communicate you might not be the character I’d written for you.

You’ll be pleased to know that Columbia Road was originally used as a pathway that led sheep to the slaughter in the early 1800s. For 19th century mutton, it seems the Hackney highway was once in fact, the highway to heaven. Today, a similar fate awaits the buds, blooms and bonsai trees purchased at the market. Sure, they might be able to dress, but the Hackney hotties kill their plants in the time it takes to walk home. The skeletal shells of empty plant pots now line their windowsills. Ah well, at least we’ve got an excuse to promenade again next weekend.

The dos and don’ts of the Hackney highway

DO buy a coffee from Hermanos – their huge sizes are worth the hefty Hackney price point.

DON’T buy a towering plant. You’ll go from prima ballerina to Where The Wild Things Are in seconds. Plus spending £40 on something you’ll kill in a week isn’t worth it.

DO escape the buzz in Arnold Circus. If the paps all get a bit much for you and you need a moment of composure, peaceful Arnold Circus is just around the bend (and there’s a Jolene for all you fanatics).

DON’T forget a picnic blanket or something to sit on. If it’s a warm day you’ll likely make time to relax in London Fields – just be sure to avoid hitting the runway with mud on your bum. The scandal.

DO get lunch at Rochelle Canteen.