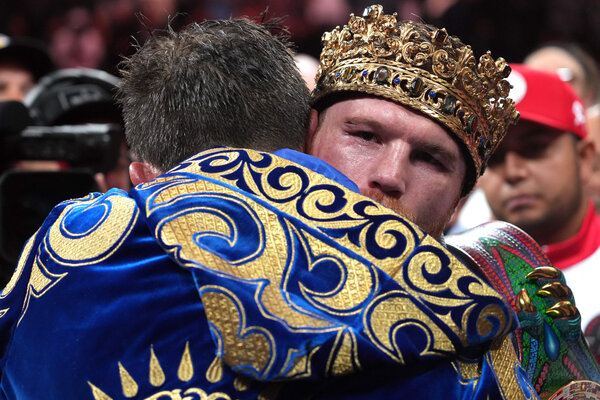 It was one of the closest rivalries in boxing, one marked by discord and controversial judging decisions because, over two fights and 24 rounds, there was little that separated Saúl Álvarez and Gennadiy Golovkin.

Was, that is, because in their third fight at T-Mobile Arena in five years Saturday night, the Mexican fighter Álvarez, known widely as Canelo, definitively outclassed Golovkin in front of an adoring crowd to retain his super welterweight titles and regain a bit of menace after suffering just the second loss of his professional career in May.

“I have shown that defeats are great, because they allow you to come back and show humility,” Álvarez said, while wearing a crown on his head, after the fight.

Álvarez won the fight by unanimous decision, with much of the drama drained from the bout early — although two of the judges said that Golovkin had only lost by one round. Perhaps the only real consolation for Golovkin was that he lasted all 12 rounds; Álvarez repeatedly boasted in the run-up to the fight that he would end it early.

Golovkin started the fight slow, testing Álvarez with his left jab but rarely doing damage with it. Álvarez damaged Golovkin’s temple early, and generally seemed content to counter with flurries while occasionally swinging wildly for the knockout punch he had promised but that never came.

Finally, after eight rounds and 24 staid minutes, a fight broke out in the ninth round. Golovkin threw caution to the wind and repeatedly advanced on Álvarez, switching up his jab-only style for a more varied attack. In the 11th round he finally landed enough hooks to open up a cut on Álvarez’s right eye. But the offensive barrage came at a price, and Golovkin received almost as badly as he gave it. It was also too late.

Golovkin, 40, has said that he will not retire after this fight. He looked a step slow, however, and very unlike the fighter who fans fell in love with because of his relentless forward-moving style, tentative.

“Remember I have three belts at 160,” he said when questioned about his future afterward. “I can still fight, guys.”

The fight was a nice bounce-back win for Álvarez, who lost to Dimitry Bivol in a light heavyweight matchup earlier this year.

But while he bested Golovkin, he was not back to his showstopping best. He will need to be better if he is to defeat Bivol in a potential rematch or if he wants to continue to dominate the super middlweight division.