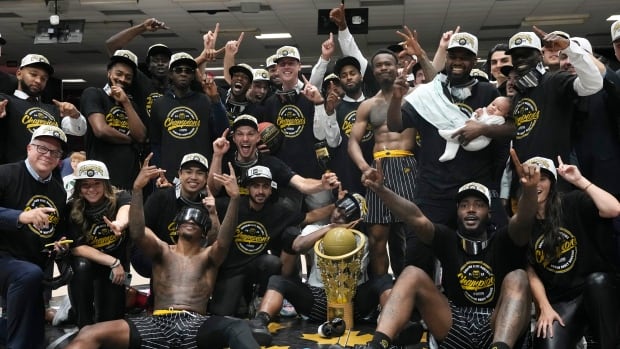 The Hamilton Honey Badgers captured its first Canadian Elite Basketball League title with a 90-88 victory over the expansion Scarborough Shooting Stars on Sunday in Ottawa.

Hamilton earned its first title in franchise history after losing in the 2019 and ’20 finals. But it didn’t come easily as the Honey Badgers nearly blew a 22-point lead in the final minutes at TD Place.

Hamilton led 89-71, needing just one point to clinch the win in Elam ending, where the first team to the target score of 90 points wins. But Scarborough went on a 17-point run, nearly upsetting the No. 1 seed and making the championship come down to the final play.

Honey Badgers guard and Canadian Player of the Year Caleb Agada was fouled by Scarborough forward Isiaha Mike and sank his first free throw to clinch the championship.

“It was fitting that we won in that fashion,” Hamilton head coach Ryan Schmidt said. “Our group was resilient and at the end of the day, we found a way to get a win. It was fun. A little tense for a second, but to be honest with you, I didn’t have any doubts.”

Hamilton fended off a Scarborough comeback, winning 90-88 to earn their first league championship.

Agada also clinched Hamilton’s semifinal win against the Ottawa BlackJacks with a free throw. He said the environment was “tough” but nothing the team hasn’t experienced before.

Scarborough head coach Chris Exilus said he took issue with the foul call that led to the game-winning point.

“We’re talking about a championship,” Exilus said. “In my opinion, you let two teams battle. We came in and we battled all the way through and you don’t end games like that.”

Christian Vital was named Finals MVP and led the Honey Badgers’ offence with 17 points on 7-of-14 shooting.

There were 12 lead changes in the first half before Hamilton took charge. But Scarborough nearly came back to regain the lead, erasing an 86-64 deficit before falling short by two points.

In the other semifinal, Harris had 22 points, eight rebounds and six assists, while Kameron Chapman added 22 points of his own in the Shooting Stars’ 93-81 win over the Niagara River Lions.

Hamilton jumped out to an early start, going up 11-4 in the first four minutes, but Scarborough fought back. The lead changed hands 12 times in the first half before the Honey Badgers took charge.

Hamilton held Harris to just two points in the first half. Harris finished third in the league with 20.39 points per game but was shut down by the Honey Badgers’ defence.

Harris scored the Shooting Stars’ first points of the second half with two free throws and a two-pointer. But Hamilton continued to outpace Scarborough, going up 69-59 at the end of the third quarter.

The lead grew to 22 points in the fourth quarter before Scarborough’s near-comeback.

“We did what we do every single game,” said Schmidt, who was named CEBL Coach of the Year last week. “We’re the number 1 defence in the league from start to finish.”

Robertson said the Shooting Stars’ struggles for most of the game were because they failed to share the ball.

“If we share the ball and we play like we did in the last, we would’ve won by 20,” Robertson said. “We were the better team. They escaped today.”

Scarborough is in its inaugural season after being added as an expansion team in August 2021. The Shooting Stars are co-owned by OVO co-founder Niko Carino.

Rap star J. Cole, who played with Scarborough earlier in the season, was in attendance at TD Place. At the conclusion of the game, Drake posted criticism of the final foul call on his Instagram.

Schmidt said winning the championship with this group was special.

“I’ve never seen a group as close as this group was,” Schmidt said. “We’re all going our separate ways, and you know how rare it is when you have a group like we had this summer, so to be able to cap it off in this fashion and put a ring on it, what else could you ask for?”