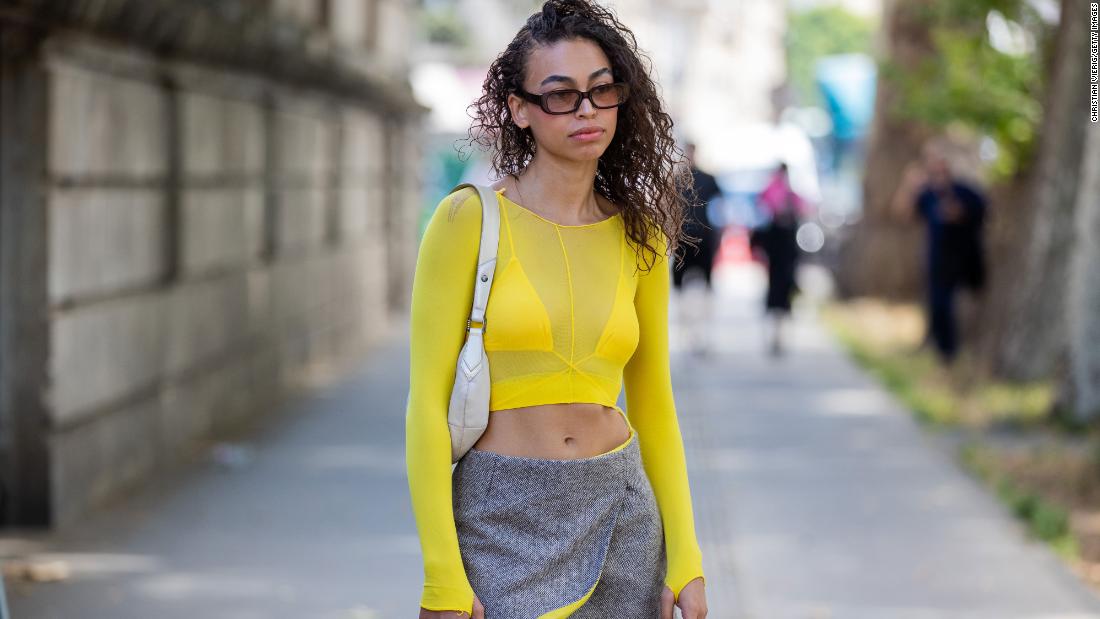 Sweat, on its face, is the enemy of good style — it smells, clings and discolors, sending delicate pieces to the cleaners and essential clothing to the damp bottom of the laundry hamper.

Every summer, sweat threatens to sneak into the most embarrassing crevices of our clothes. But 2022 has been especially unforgiving — both June and July saw some of the hottest days in recorded history the world over. Based on the current trajectory of climate change, those history-making highs may persist into September. (And while summer is technically winding down in the northern hemisphere, it will soon start further south.)

On this increasingly warm and inhospitable planet, dressing for extreme heat won’t be so much a trend as a necessity, says Rachel Seville Tashjian, fashion news director at Harper’s Bazaar and former GQ fashion critic.

“The challenge and pleasure of loving clothes is figuring out how to make something pragmatic look fantastical,” Tashjian says.

Looking stylish in the heat can be challenging but not impossible, so long as you’re willing to get creative. Below are some tips.

There’s a scene in the second season of HBO’s “Girls” in which anti-heroine Hannah trades tops in a club with a stranger she’s dancing alongside. She ends up in a sheer, mesh, chartreuse tank top, and she keeps on gyrating and dripping in communal sweat. The suggestion of a shirt made one critic swear off mesh altogether.
But that was 2013, this is now — and Hannah may have had the right idea for once. Earlier this year, British Vogue declared that “haute mesh is back,” appearing in recent collections by Mugler and Glenn Martens, along with emerging brands like Miaou and Ottolinger in more colorful hues. Beyoncé’s Ivy Park line for Adidas even included a full-length, transparent mesh catsuit.

Mesh is an essential fabric in Tashjian’s summer rotation, including a vibrant Y-3 floral mesh skirt and top she bought on eBay and a Stüssy mesh tie-dye skirt that doubles as bikini coverup. It’s a comfortable and breathable fabric, she says, and comes with built-in ventilation. And mesh doesn’t have to be revealing or tight — it works well in oversized silhouettes, like a billowy top to pair with bike shorts, or even in its more classic form, like a pair of Dries Van Noten’s mesh shorts that resemble part of a gym uniform.

Dominique Jones, a TikTok creator who shares inspired menswear ensembles, vintage finds and up-and-coming Black designers with 73,000-plus followers as @DapperDom, says he opts for lightweight fabrics like linen and light-colored tops on über-hot days. He doesn’t want to “compromise an outfit or fear that I’m going to be soaked as soon as I leave the house,” he says.
On his TikTok account, Jones is often seen in casual tops unbuttoned with a white tank top underneath — some protection against sweat stains — with a statement shoe, like brown cow-hair Brother Vellies mules. Even a long-sleeve embroidered shirt from Bode can become a summer staple for Jones as long as it’s paired with equally breathable bottoms, like vintage linen pants he thrifted.
Lightweight fabrics like linen and cotton breathe while synthetic fabrics like polyester and spandex can wick away sweat or resist it altogether. But athleisure brands don’t corner the market on moisture-wicking fabric, Tashjian says: Luxury designers like Marine Serre and Yohji Yamamoto employ light, cooling fabrics for all manner of dress. Despite being long-sleeved, Marine Serre’s crescent moon jersey still feels cool, like a wispy second layer of skin, and even Yamamoto’s oversized dresses and blousy tops feel gossamer-thin, she says, since they’re built with cotton and linen.

Then there are the brands who offer pieces that can double as stealth athleisure, like Collina Strada, Hillary Taymour’s label that spins whimsical looks out of deadstock fabrics. Taymour recently released playful activewear through Canadian e-retailer SSENSE that doesn’t feel out of place alongside the brand’s regular assortment of triangle dresses and strappy tanks.

“I think fun activewear will still stay on the rise so we can enjoy sweaty days and still look fun,” Taymour says.

She has taken to layering active tops made of spandex and polyester underneath light outerwear. She also pairs cropped tops with the baggier cargo pants from her main collection — a look she says helps her avoid sticking to subway seats in the summer and disguises the athletic purpose of the top.

But keeping things basic has its merits, too: Johnny Cirillo, who photographs New York’s trendiest pedestrians for his Instagram, @watchingnewyork, says he wears Crocs (“to let the toes breathe”), short shorts, a loose tank top and a wet bandana around his head all day. Crocs, of course, have appeared everywhere from the Oscars red carpet to Balenciaga runways, have the endorsement of Justin Bieber and Post Malone among others — and they’re waterproof.

Of the hundreds of New Yorkers Cirillo has photographed this summer, a definite trend has emerged — less is more. From strappy crop tops with oversized jeans to a crochet coverup with a neon bikini peeking out from underneath, his subjects are forgoing traditional shirts or bottoms to lighten up.

Whether its to stay cool or stay on trend, celebrities have managed to do both in sheer numbers over the summer months — from Florence Pugh in a revealing hot pink Valentino gown to Dua Lipa, who paired a see-through white number by Jacquemus with matching white bandeau and briefs while attending the designer’s wedding last week.

Tashjian says that when it comes to translucent clothing, “sometimes I wear a bathing suit or a light slip underneath and sometimes I do not.”

“I think we’re at a point where the weather is so extreme that you have to dress for personal comfort and pleasure,” Tashjian says. “if someone has a problem with what you’re wearing when it’s 104 degrees, it’s absolutely their issue!”

Perspiration is a guarantee if you’re spending extended time outside. The key to making sweat a fashion statement is thinking of it not as an impediment, but as an accessory. Remember the phrase, “Women don’t sweat; they glisten”? Think of it as physiological highlighter.

A daring look that demands confidence, this guest wears a matching oversized set from Namilia. Experts told CNN that perspiration is inevitable, so wearers might as well embrace it. Credit: Edward Berthelot/Getty Images

Some celebrities have perfected the “wet look”: There was Kim Kardashian on the red carpet at the 2016 MTV Video Music Awards with slick, perma-damp hair; on the cover of Vogue in 2019 in soaked Chanel; in a Mugler dress dripping in crystal at the Met Gala that same year.
Brands like Di Petsa and Versace have also recently created collections of clothes that make wearers look like they just walked out of the ocean. (Bella Hadid counts herself as fan of Di Petsa, which has said that its wet dresses are inspired by “the way that we treat our bodily fluids.”) There’s no better camouflage for sweat than clothes that already look wet.

“I’ve seen enough Italian movies to know that looking sweaty is actually extremely sexy,” Tashjian says. “I don’t mind it. But I don’t want to sweat more than I have to, so I’m happy to wear sleeveless dresses or baggy shorts or other things I don’t typically wear in the less extreme months.”

Sometimes, the price of an excellent look is a dribble of sweat running down your sideburns and what feels like a small reservoir on the lower back of your top. But it’s a price Jones says he’s willing to pay.

“My philosophy is to look good doing it,” he says, accepting that he runs the risk of “the occasional damp pits.”

“I personally don’t try to hide my sweat, I just embrace it.”