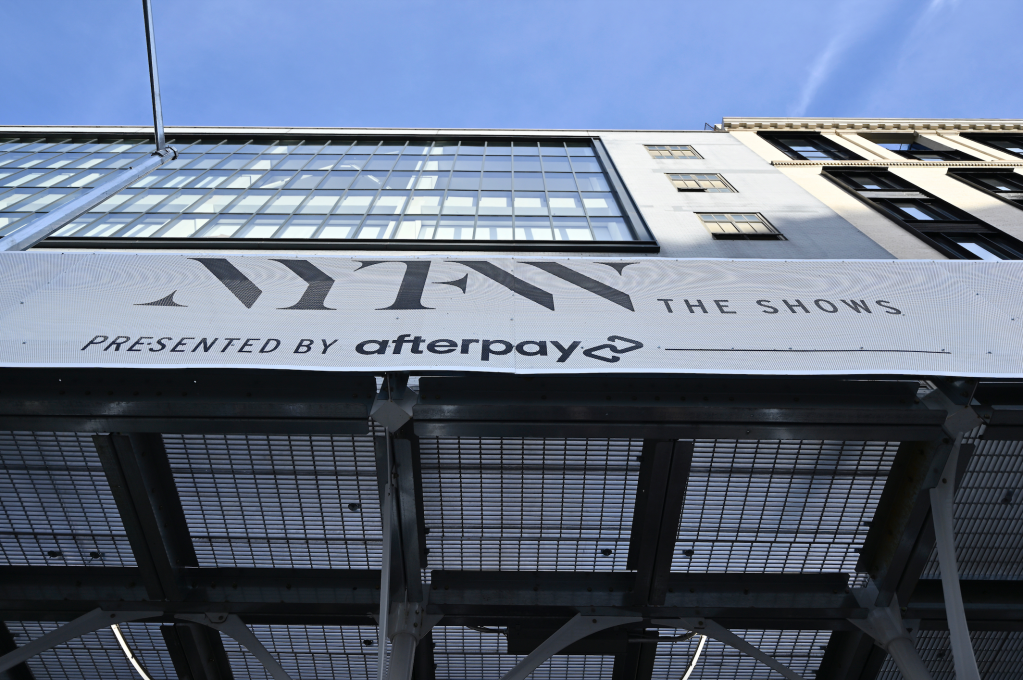 IMG, the official organizer and operator of New York Fashion Week: The Shows presented by Afterpay, has revealed its slate of programming and events for September.

NYFW: The Shows is produced by IMG Focus and will take place Sept. 9 through Sept. 14, live at Spring Studios and virtually at NYFW.com.

For the fifth season in collaboration with IMG, The Black in Fashion Council Discovery Showrooms returns with a new lineup including Ajovang, Atelier NDigo, Harbison, Izayla, Jessica Rich, Kwame Adusei, Madame Adassa, Muehleder, Sammy B and Vavvoune. In addition, BIFC designers, Izayla, Adusei, Atelier NDigo, Muehleder and Sammy B will create a capsule collection and pop-up shop in collaboration with Mailchimp, which will be available at Spring Studios and online.

The buy now, pay later platform Afterpay unveiled limited-edition NFTs, “The Keys to New York Fashion Week,” which give consumer access to limited-edition NFTs from Altu by Joseph Altuzarra, anOnlyChild, Jonathan Simkhai, Kim Shui and The Blonds only at Keys.NYFW.com. Each designer’s NFT serves as a digital collectible and also unlocks real world product drops and exclusive experiences during NYFW: The Shows. All proceeds from the sales of the designer NFT Keys will be donated to Free Arts NYC, bringing art and mentoring programs to children in underserved communities in New York City. Afterpay will also partner with Area and Kim Shui to unlock consumer access to their runway shows.

NYFW: The Talks, IMG’s series of conversations, will feature industry thought leaders on topics in fashion this season. Among the topics are “Navigating the New Phygital Age of Fashion and Art,” “Cultivating the Future for Latinx Creators,” “Mindfulness in Fashion,” “New Faces in Indonesian Fashion,” “The Long-Term Luxury of Sustainability” and “Ten Years of Costuming the New York City Ballet Fall Fashion Guide.”

Among the activations, showgoers can stop by the Alo Yoga Wellness Sanctuary to receive complimentary wellness treatments during fashion week to mark the debut of the official wellness partner’s Aspen Collection, the brand’s first premium line. Keds will reveal its second exclusive capsule collection on the runway. UPS, returning to NYFW for its second season, will collaborate with Awake NY designer Angelo Baque to recognize the creative pursuits of exceptional designer talent with a connection to the Latine community. In addition, the Lovesac and Alice + Olivia co-branded Mobile Concierge will be making the rounds throughout Manhattan.

In addition, consumers can purchase tickets to shows including Badgley Mischka, The Blonds, and Dur Doux, among others at onlocationexp.com/new-york-fashion-week-tickets.

The digital destination for NYFW: The Shows is NYFW.com, for exclusive designer content, livestreamed fashion shows, cultural programming and commerce during NYFW. NYFW: The Shows features more than 140 designer activations.

Shows and presentations will also be presented on Runway360, CFDA’s centralized hub. Followers can also get a front row seat to fashion week by following @NYFW across TikTok, Instagram, Twitter and Facebook.