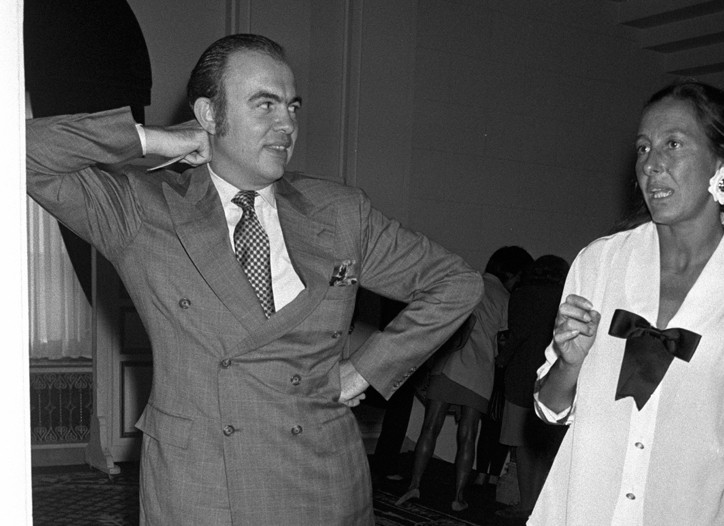 Editor’s Note: This is the last of the weeklong series diving into the Fairchild Fashion Archives. Here, WWD reproduces a Feb. 17, 1987, interview with Christian Lacroix in Paris, who had just left Jean Patou to set up his own couture house funded by Bernard Arnault.

PARIS — He’s the Sputnik of fashion, rocketing to the top with the speed of a spaceship and creating an international panic along the way. You can’t mention his name in this city without someone sputtering in shock. Christian Lacroix, who emerged just a few seasons ago as the mad pouf-and-bustle man behind the scenes at Jean Patou, has catapulted himself into a faraway fashion galaxy, leaving everyone else stranded on earth.

Less than two weeks ago he announced he was forming his own couture and ready-to-wear house, bankrolled by Financiere Agache, Christian Dior’s parent company, through one of the juiciest fashion deals. It is the first major couture house to be formed since Ungaro’s in 1965.

Lacroix will have total creative freedom and a “generous” budget to create a couture collection, to bow this July, and a rtw line, slated to appear in stores by fall 1988.

These days, the major launch of a “maison de couture” is considered audacious enough. The fact that it will be Lacroix’s, whose fun-filled pop couture tweaked the nose of many a traditionalist, making heads swivel.

Is it the end of the great Paris couture tradition? Or the dawn of a new era?

“I feel I have to do something very, very fast. It would be too late to wait any longer,” he says. “I’m 35 and not getting any younger. Today’s established couturiers,” Lacroix points out, “are of another generation and are getting on in years. There is going to be a new generation.

“This was an unbelievable, big opportunity. I’m happy and proud. It is a heavy responsibility, but it is very exciting. Bernard Arnault (president of Agache) has given me his trust.

Arnault is also pledging over $8 million for the new house with a comfortable headquarters and a lifetime contract for Lacroix.

In return, Lacroix vows “to find a new way for couture.

“We have to keep the roots and give back its strength. Like in Japan — there is nothing more modern than the ancient things. For me, haute couture is a necessity. I never would have done this job were it not for the haute couture. It is a comfort, a security. I almost feel it is our duty to continue. Haute couture is France. We have to keep all the skills and craftmanship alive.”

The house of Lacroix will be different from the rest. “Just one more ‘maison de couture’ is not very useful,” he says. His plans remain a mystery, but he does admit the sketches for the first line are already completed. “I know what the trends are,” Lacroix smiles secretively. Poufs and bustles, the trademark trimmings that helped him grab attention at Patou, are things of the past. “What we did at Patou is over now.” He shrugs. “I feel I have a new skin.”

As he sees it, couture’s function is to serve as “‘a window” for rtw. His couture line will be tightly edited, he says — “traditional, but lighter.”

The soft-spoken designer, born and raised in Provence, is the French equivalent of a Southern gentleman. He refuses, with a charming smile, to name drop about the new, important customers who recently began to visit him at the Patou atelier and who are sure to follow him to his own. Yet among this elite club, including Susan Gutfreund, Jayne Wrightsman, and Gloria von Thurn und Taxis, he is fast becoming a name to drop.

“I was convinced I would not like it, that he was an invention of the press,” says Queen Bee Marie-Helene de Rothschild. “By the end of the show, I was amazed, and seduced. He obviously can do whatever he wants. He’s fresh, new blood and I think that’s great news for France. He’s not just another little couturier. He’s big. He and Saint Laurent are the two greatest.

The well-dressed woman, in Lacroix’s opinion, is not simply a woman in a beautiful dress. “Sometimes, though the dress is technically beautiful, there is no agreement between it and the woman wearing it. As for my personal taste,” he continues, “I’m attracted to a very extreme, funny and daring woman.”

On the Patou runways, his tastes manifested themselves in jolts of color and fantasy, handpainted faces on minidresses, vivid plaid blazers embroidered with sequined, paisley prints, enormous, whimsically trimmed hats and rich layers of tulle and ruffles, bows and lace, bold stripes in Caribbean colors, polkadots and baroque prints. He cast unusual models with striking looks, like Marie with her long gray mane of hair, and the exotic Anh, to wear his looks.

At Patou’s wild shows, Lacroix electrified the couture look, although he still respects the traditions and couture’s great talents. At the “golden thimble” fashion awards, he says, “Marc Bohan’s clothes for Dior are always the most beautiful.” Nevertheless, the designer belongs to a new generation that can attribute just as much influence to television, Jean-Paul Gaultier and the United State, and he gives a serious nod of acknowledgment to his American influences.

“I am a child of the Fifties. We were so impressed by the things from America in this post-war time — by the comics, the movies, Mickey Mouse, all those strange children’s books designed by Americans with their strange little towns and landscapes, grandmothers in patchwork dresses and brightly painted houses. It was a wonderland for me. The first time I saw the States, I felt I had lived there in another life.

“I was especially impressed by the women in American magazines. There is a certain sort American allure. It is casual and elegant at the same time. When you look at a McCall’s Magazine from the Forties and Fifties, it is unbelievable how modern women were. French women have no sense of the casual. Sometimes when they try, they tend to do a little too casual, and it’s ugly. Or if they dress elegantly they sometimes look too coquette.”

Lacroix, who speaks fluent English, still loves many aspects of America, from the Ralph Lauren men’s wear he buys for himself to New York’s Post House restaurant.

“I’m very nostalgic. I love photos of Babe Paley when she was young and all those Avedon models. Every Saturday, I still buy all the American magazines I can. I love paper, all sorts of paper, maybe more than fabric. All those images, images, images.”

As Patou’s resident couturier for five years, he dressed pretty young things, like friend Pia de Brantes and French pop starlets who borrowed his clothes for their videos. On the other hand, as he likes to point out, some of his best clients were staunch 70-year-old matrons from the country.

During his sojourn at Patou, Lacroix could be seen wandering around the coldly elegant beige and blond wood salons in blue jeans, blazer, one of his eccentrically bright, striped shirts, printed ties and pocket squares, clutching a plastic bottle of mineral water and grinning mischievously as he presented another flamboyant model.

Some ladies “got it” early on. “I owe a lot to people like Marina de Brantes (the mother of Pia) who proved that my dresses were not “unwearable for a classic, elegant Parisienne.”

Before his arrival at Patou, the 68-year-old company had been comfortably chugging along on the profits of its Joy fragrance. It had traditionally produced uneventful classic clothes by a stream of designers and assistants, some of whom went on to make great names for themselves, including Karl Lagerfeld, Guy Laroche, Angelo Tarlazzi, Marc Bohan and Jean-Paul Gaultier.

“I wanted to prove that this very traditional house could have something new to say,” says Lacroix. “Jean de Mouy (Patou’s president) gave me a lot, and I think I gave Patou a new strength. I think it will go on with an important role to cultivate new talent. But it was time for me to leave. It is dangerous to stick to habits. We did all we could do there. I had to try my own wings.”

Lacroix studied art history at the Sorbonne, but quickly found himself in the world of fashion, first as an assistant to Guy Paulin and then at Hermes doing rtw.

According to friends, Lacroix is a kind, sentimental and sensitive fellow. “He is quiet and discreet. But when he makes friends they are very good friends,” says Marina de Brantes. He met his wife, Francoise Roesenstiehl, at a tea party 13 years ago when he first arrived in Paris. They share a fanatic love of the opera, hold season tickets and faithfully go to all the special events sponsored by the Paris Opera.

“I work and work,” says Lacroix, when asked to describe a typical day. At night, he usually prefers to stay home, a cozy apartment on the Rue de L’Odeon in the sixth arrondisement and “send Francoise out to dinner parties for me — we are not at all socialites.”

The couple always spends four or five weeks in the south of France around Provence every summer. Lacroix used to take the Metro to work every morning, but that, among other low-profile habits, may change with his new high-power job. “Lately my days have been very odd,” he muses.

When Lacroix left Patou, he took with him only his longtime friend, adviser and now business partner Jean Jacques Picart, who will handle “image and marketing” for the new house.

“I love the extremes,” says Lacroix. “I feel very calm, prudent and quiet. But at this moment, I also feel boiling.

“The excitement is not just to see my name on a label. I don’t even like my name very much. It’s difficult to pronounce for the Japanese and the Americans. It doesn’t have the nice sound of Patoooo or Dee-orrr,” he intones deeply. Then he laughs. “I love this idea of starting from the beginning, of building something from zero.

“Fashion is a way to express yourself. No more. No less. Women have won their freedom in fashion. Now, you can wear whatever you like. But I think, perhaps in this last year or so, we overestimate it. Fashion has become ‘fashionable,’” he frowns. The lover of extremes who in one breath claims “designing is the only thing I love in life,” also dreams of finding a retreat in his beloved sunny south of France soon and enjoying what he calls “la dolce vita.”

“There is a side of me that loves to sit naked in the sun and do nothing.”