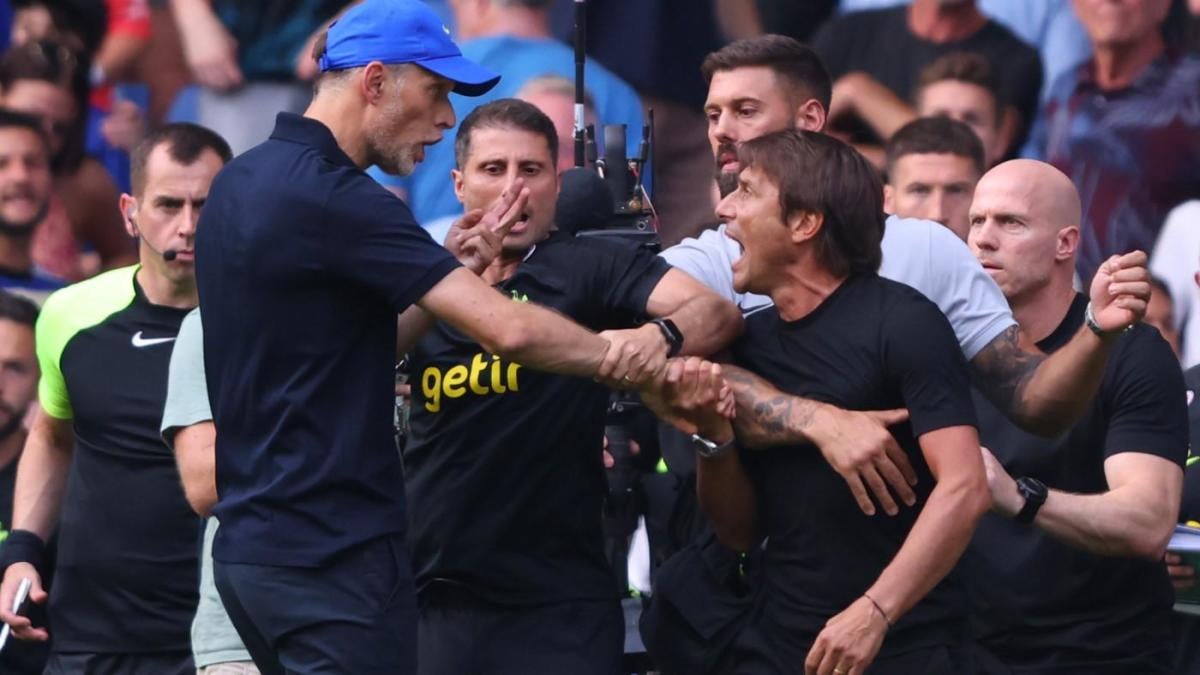 LONDON — Thomas Tuchel and Antonio Conte tried to shrug off the dramatic face off that earned them red cards in a thrilling London derby but the performance of Anthony Taylor was no laughing matter for the Chelsea manager as he suggested the referee should not take charge of Blues’ matches again.

Both managers had been booked in the immediate aftermath of the first equalizer in Tottenham’s 2-2 draw with Chelsea before a post-match handshake lasted altogether too long as they squared up to each other once more at the final whistle.

Conte had reacted in exuberant fashion to both equalizers, Pierre-Emile Hojbjerg driving low from outside the box on 68 minutes before Harry Kane rose to flick home a corner in the dying minutes of the match. Tuchel was hardly blameless either. When Reece James fired Chelsea into the lead for the second time he proceeded to sprint down the touchline in celebration, right past the Tottenham dugout.

Referee Anthony Taylor gave both managers a straight red at the final whistle, which would rule them out of their next game. The on field fireworks did not extend into the post match press conferences, where both coaches were keen to laugh off their histrionics, with Tuchel even suggesting that he had somewhat enjoyed the set to and thought Conte might have also.

“I just compared it two players who had a bit of fight on the field but nothing happens, nobody gets injured,” said the Chelsea boss. “The two managers got involved today because both of us were fighting for our teams. That was it. Nobody got insulted. Nobody got hurt. We didn’t have a fist fight. For me, it’s not a big deal.

“It was such an intense match. Both dugouts are very, very close. Did I enjoy it? Yes and I think he did as well.”

Conte was similarly eager to build bridges across London, repeating on more than one occasion that the stramash was “not a problem.” He said that Taylor “did not understand the dynamic” of what had happened in the dugout, suggesting that he believed a red card had been too harsh a punishment for both. However, he could not entirely help himself but to point out that in his view Tuchel, who had seemingly held on longer as the two shook hands, had been the post-match aggressor.

“Honestly I don’t want to come back again but for sure there is a video to understand what happened,” he said. “To be sure I’m not a pacifist. If I see aggression my answer is with aggression. For sure.”

It is not just the red cards that Taylor will be under the spotlight for. Tuchel’s anger after the first goal had been at least part based on what Chelsea felt had been a foul by Rodrigo Bentancur on Kai Havertz. It should, however, be noted that managers were briefed before the start of the season with regards to when VAR would retrospectively check potential fouls made earlier in the passage of play. VAR official Mike Dean did not look back at the challenge by Bentancur but he did judge Richarlison to not be interfering in play when in an offside position as Hojbjerg shot for goal.

Dean also opted not to give Cristian Romero a red card when replays showed he had been grasping Marc Cucurella’s hair in the corner just before Kane’s equalizer. It was these incidents, rather than the elongated handshake, that drew Tuchel’s greatest ire.

Taylor, who sent off Mateo Kovacic in the 2020 FA Cup final three years after he had allowed a controversial Alexis Sanchez goal to stand, does not enjoy the best reputation among Chelsea supporters even if his presence on the field for some of the country’s biggest matches would suggest he is held in high regard by his counterparts at refereeing body PGMOL.

“Maybe it would be better [if he did not take charge of Chelsea games],” Tuchel said when he was told some supporters were of the same belief. However his anger was not reserved for the man in the middle. “Honestly, we also have VAR to help make the right decision. Since when can players be pulled by hair? Since when is that [not a foul]?

“If [Taylor] does not see it, I do not blame him. I didn’t see it. But we have people at VAR who check this. Then you see it and how can this not be a free kick and a red card? This doesn’t even have to do with the referee in this case. If he does not see something, that’s why we have people to check if there is a decisive error going on.”

When it was put to him that he would miss Chelsea’s trip to Leeds next week, Tuchel’s response was scathing. “I cannot coach but the referee can whistle the next game?”

It may yet be that the ramifications of this game extend beyond merely that red card for the Blues head coach.