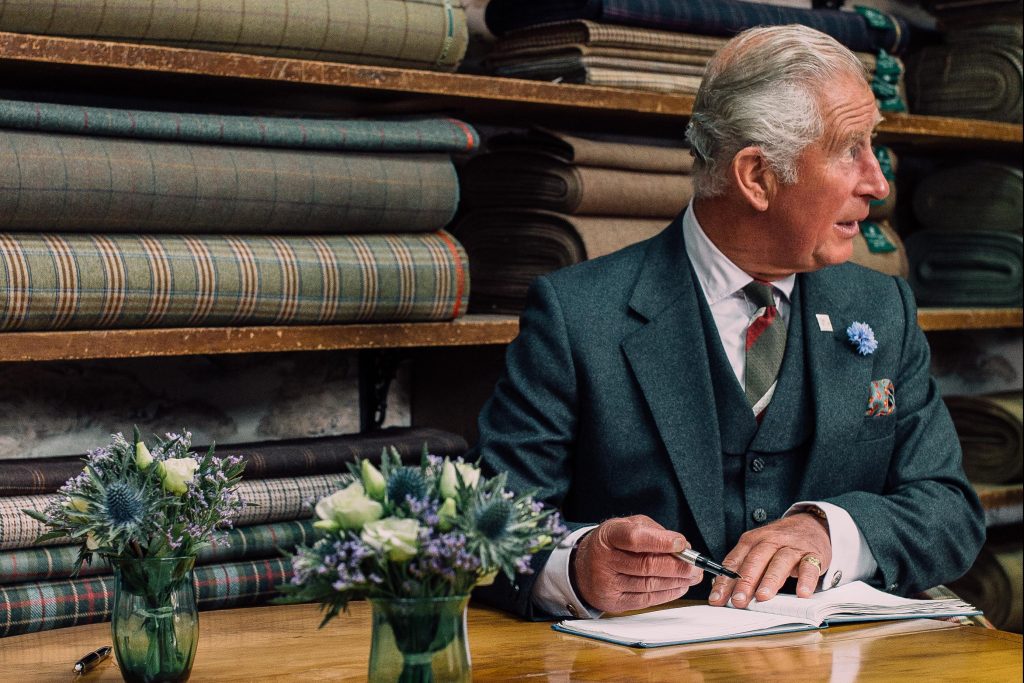 Following Queen Elizabeth II’s death on 8 September, the Prince of Wales automatically acceded to the throne as King Charles III.

Through the years, Charles has become an unlikely fashion influencer. His sartorial flair earned him the title of “world’s best-dressed man” by Esquire magazine in 2009 – although it was an honour he laughed off as unlikely, and joked that it was just a way to sell more copies.

Throughout his time as the heir apparent, Charles has often been spotted sporting double-breasted suits with a silk pocket square setting off a tie, coupled with his signature gold signet ring. He is known to source British-made tailored suits from Savile Row tailor Anderson & Sheppard, smart shirts from Turnbull & Asser and traditional kilts in Balmoral tartan.

He has been known to wear waxed Barbour jackets – in various colours and lengths – at his Highgrove estate in Gloucestershire.

Ted Baker creative director, Anthony Cuthbertson, says Charles’s dedication to the fine art of British craftsmanship is what cements his place as figurehead for men’s formalwear, and predicts that his sartorial style will boost British tailoring sector now that he is king.

“King Charles III is a champion of Savile Row tailoring and “made in Britain” tailoring, while being the true influence of smart wear,” he says.

“Therefore, my predictions in his role promoting British menswear would be that we will begin to see more sartorial formal suits and beautiful, tailored shirts – not forgetting the Windsor knot ties.”

Just days after Charles’ transition from prince to king, Frasers Group reportedly made a bid for Savile Row tailor Gieves & Hawkes, which has previously dressed the newly proclaimed king and his son, William, the new Prince of Wales.

“Despite the very sombre news of the passing of Her Majesty the Queen, hopefully King Charles III will be a positive in the weeks and months ahead,” he says.

“The way Flannels has emerged as the UK’s leading luxury goods chain is a testament to how brands such as Gieves & Hawkes can survive and indeed grow domestically. I can see bespoke and made-to-measure fine tailoring resonating very well in the centre of their formalwear departments which have Gucci, Canali, Prada and Boss.”

He adds: “There will be a huge opportunity to change all the military badging from EIIR (Elizabeth II Regina) to CIIIR (Charles III Rex). It is going to be a purple period for Savile Row tailoring.”

In recent years, Charles has been eager to burnish his environmental credentials, explaining that he does not like to throw out his old clothes.

For his younger son, Prince Harry’s 2018 wedding to US celebrity Meghan Markle, he wore a pearl-grey frock coat from 1984. 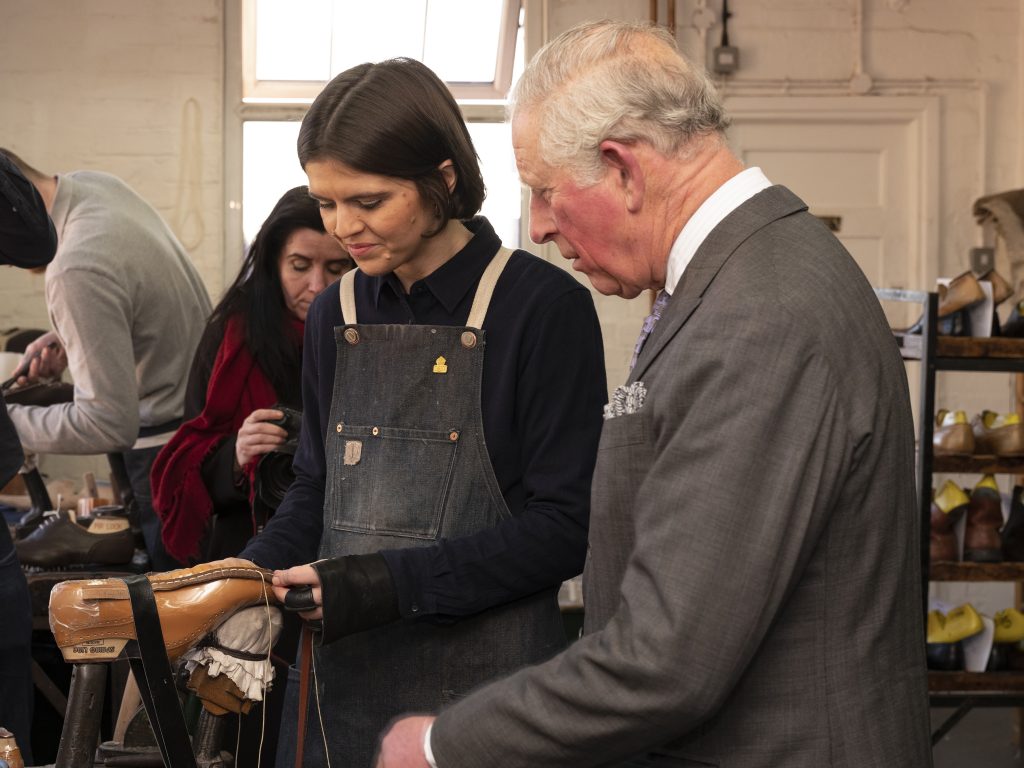 Visit to the Tricker’s factory in 2019

In 2020, Charles’ educational charity The Prince’s Foundation, established in 1986, launched a luxury capsule men’s and women’s wear collection with Yoox Net-A-Porter, with clothes made from natural fibres, including cashmere, wool and organic silk. The Prince’s Foundation told Drapers that it will keep its name.

They cover fields such as the environment, global sustainability, youth opportunity, education and faith.

Adam Mansell, CEO of the UK Fashion and Textile Association (UKFT), tells Drapers that his support of the clothing and textile industry has been invaluable: “We are extremely grateful for His Majesty King Charles’s involvement with the wool industry and promoting its sustainability, as well as his work around production, craftsmanship and manufacturing skills through Dumfries House [in East Ayrshire, which houses educational initiatives established by the king’s charity, The Prince’s Trust].

“The royal family more generally, including the UKFT president the Princess Royal and other senior members, have been instrumental in recognising the importance of the UK fashion and textile manufacturing industry, and the breadth and depth of talent of those who work within it.”

Tricker’s received a royal warrant for shoe manufacturing in 1989 from the then Prince of Wales, who honoured the Northampton footwear manufacturer with a visit 20 years later.

Martin Mason, managing director, says: “We were extremely proud to welcome King Charles III, formerly known as the Prince of Wales, to our Northampton shoe factory on 28 January 2019 to unveil our commemorative plaque, as we celebrated our 190th anniversary as England’s oldest shoemaker. 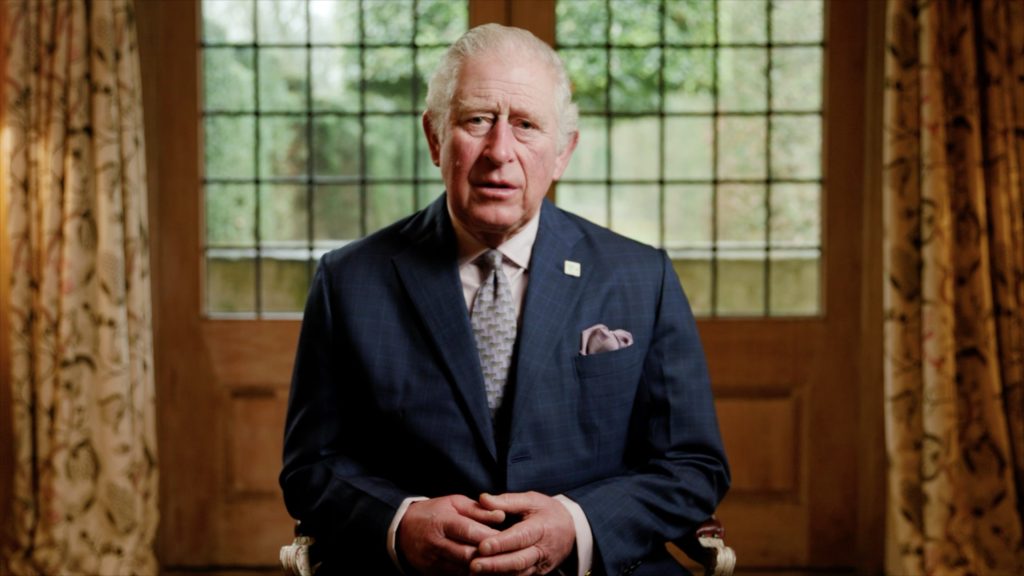 King Charles is patron of the Campaign for Wool

“The dedication and commitment of the king to young people, craft skills and the common good is well known and has had considerable influence across the globe.

“At the end of the tour, His Majesty as the then Prince of Wales, unveiled the plaque commemorating this historic visit in front of our employees and commented: “Many congratulations everybody on reaching your 190th birthday. Sorry it has taken me 190 years to get here. It’s marvellous to see such a highly skilled operation. I do congratulate you, and I hope you manage to keep it all going for many, many more years.”

Chris Jones, co-managing director of royal sock maker and warrant holder Corgi, says: “The new king is also hugely knowledgeable on our industry and shows a personal interest in the products his warrant holders make.

“Corgi was awarded a royal warrant in 1987 to HRH the Prince of Wales. We had been supplying socks and knitwear to the royal household for many years before that ,though.

“The warrant is a superb endorsement of the quality of our products and has helped us hugely to expand our international trade, which now accounts for around 65% of turnover. We sell to more than 35 countries around the world and the warrant is a big part of this. It helps us gain entry to trade shows and arouses the interest of prospective new customers helping us get the first interview. In Japan and China, people recognise the importance of the warrant and buy our products as they are assured they are the best quality.”

He continues: “It is something we are all very proud of, from our staff to our customers. It is a matter of pride to the staff that we have Prince Charles as a patron and that he feels the work we do warrants this recognition. We, in turn try to uphold his values, doing a lot of work to reduce our impact on the environment from using only biodegradable/recyclable sugar cane-based plastic to generating more than 60% of our power from solar panels.

People believe that his interest in sustainability could push for more agenda setting, as well as spark a wider interest from consumers.

The Campaign For Wool, which launched in 2010 to educate consumers about the benefits of wool and help to support and grow the wool industry, is run by a coalition of industry groups convened by King Charles, when he was Prince of Wales.

Sir Nicholas Coleridge, chairman of Campaign For Wool, tells Drapers: “At this critical point in history where we are experiencing climate change first hand, His Majesty King Charles III’s key environmental messages have the potential to carry even more weight and reach an ever-wider audience.

“The king has long advocated for sustainability in the fashion and textile sector, and first became the patron of The Campaign For Wool back in 2010. The wool trade, in particular, has benefitted over a decade from his support and skills in bringing people together to affect change and help draw attention to critical projects and initiatives not just in the UK but on a global level, too.”