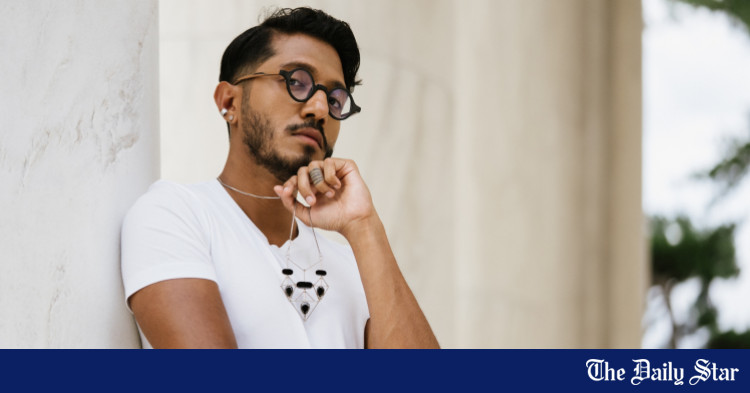 Almost coming full circle, jewellery designers are now blurring lines between masculine and feminine pieces, designing baubles that have no motive other than to adorn their wearers. One such jewellery designer, Lora Khan, from 6 Yards Story, has made space for male customers in her new collection, Aura. The seed for this idea was planted by one of her friends who sensed a gap in the market for jewellery that men could wear. After much deliberation, Lora decided to present genderless jewellery to her customers.

For her first collection, the designer chose to work with symbols which are gender inclusive and thus, not very difficult to play with.

“These pieces are a representation that do not follow a binary, so it would appeal to all sexes,” says Lora Khan.

The world may have moved away from the many sets of rings that the Egyptian royalty used to sport around their necks to less dramatic pieces, but necklaces are every bit as trendy as they were, centuries ago. Aura brought out symbolic, large-sized pendants, that look bold on the wearer and lend playfulness to the attire. They look as elegant on a man as on a woman and come in symbols such as a snake or an eye.

King Charles I of England used to wear one large drop pearl earring in his ear, which became a trend for men in the 16th century. Fast forward five centuries, customers of the 6 Yards Story have fallen in love with ear cuffs, an inclusive fashion statement that flatters every wearer and does complete justice to one of the more essential forms of contemporary jewellery — the earring.

Bracelets have adorned wrists without associating themselves to any particular sex, whether in the form of delicate and intricate pieces, engraved nameplates, chunky chain links, or even birth stone amulets. Bracelets from the Aura collection feature elephant symbols and come with a convenient and innovative magnetic clasp, to do away with cumbersome size measures for male or female wrists. The versatile wrist pieces can make a man look rugged and powerful while simultaneously lending grace and a traditional aesthetic to a woman in a sari.

“Truthfully speaking, I played it safe,” says Lora. “I knew gender neutral jewellery was a new offering so naturally there would be male takers, but I designed the pieces in such a way that my female customers, of which I have many, would surely enjoy the products equally, if not more,” she adds.

The designer however, was pleasantly surprised because the response from her male customers far exceeded her expectations.

“Genderless jewellery is a norm in the West, but judging by the sheer number of positive responses I received after the release of Aura, I realised that there was a largely untapped market for the product in this part of the world as well,” says Khan.

She plans on designing more gender inclusive pieces to her collection next year where she hopes to incorporate the power of symbols into other forms of jewellery.