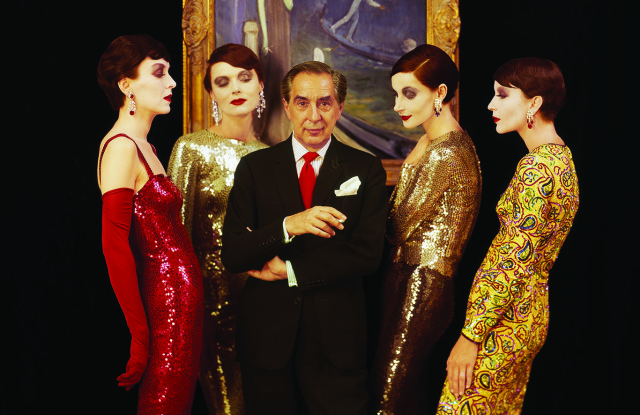 Editor’s Note: Throughout this week WWD will look back through the Fairchild Archive at some of the designers it has interviewed and profiled through the years, accompanied by photos of their collections. On Monday, the series begins with a July 11, 1966, interview with the legendary American designer Norman Norell. (An explanation: The article has been reproduced using WWD’s style at the time, which leaned heavily toward all-capital letters, ellipses and bold-faced type.)

THE ONLY AMERICAN DESIGNER IN THE SAME LEAGUE WITH THE GREAT PARIS COUTURIERS SHOWS HIS FALL COLLECTION AT A CHAMPAGNE PREVIEW TONIGHT.

IN ADVANCE OF THE OPENING, NORMAN NORELL CHATS EXCLUSIVELY WITH WWD ABOUT IT.

It is 90 degrees outside.

Norman is relaxed in his cool, stripped-down showroom.

Not a thread or swatch in sight.

No hint of frantic last-minute fittings behind closed doors.

Norman exudes confidence…admits everything is not completely finished.

No temperament or wan looks, though the workmen have spilled ochre paint on the carpet and there’s no time to have a new one.

He is wearing his patriotic blue suit with red tie and blue and white striped shirt.

There is a shrewd twinkle in his eye as

HE LETS THE CHIPS FALL WHERE THEY MAY.

“THIS COLLECTION IS GOING TO BE SHOWN STRAIGHT. People have overdone the presentation of fashion. It’s time to junk all that gimmicky stuff.

“I’m having no private clients…never do…This is a business thing, not a social affair.

“THIS TALK OF A RETURN TO ELEGANCE IS A LOAD OF BALONEY.

“Youth can be elegant…youth still has the influence…and that is where the influence will remain…and I don’t think that comes from Paris at all. With the youth bit, Paris is not with it…it comes from London and New York.

“We won’t go back to dowdy, old lady clothes. You design a so-called woman’s dress and make it a size 8 and it’s still an old dress. That’s why the whole woman’s dress business collapsed. Even a young dress in a size 18 gets automatically older.

“I’M BORED AS HELL WITH SKIRT LENGTHS…it all depends on the woman.

“It’s a very healthy thing that women decide what they want. A designer can’t dictate any more.

“It’s a knee length thing now…ours will be short.

“I can hear it now….Paris will make headlines…an inch or a half inch. That’s not important. Only when it gets way down mid-calf will it be news. I see no reason for longer skirts…no reason in the world to lengthen skirts for a long time to come.

“AS FOR THE SHAPE, AMERICA AS A WHOLE IS JUST GETTING USED TO THE NO-WAIST DRESS.

“You can’t suddenly change that…women are all for comfort…they don’t want to be cinched. A belt requires a small waist and who has a small waist today?

“I have some straight and narrow shapes…some loose…in the collection.

‘I’M DOING MUCH MORE COLOR THAN I’VE EVER DONE…two or three or even four strong colors in one costume…perhaps a strong-color coat over a light dress…or a light coat over a dark dress.

“You feel happier wearing color. You remember when the boys came to Halloran Hospital during the war?…They were put into bright red pajamas. It’s a good psychology.

“My color statement this time is quite bold. It’s going to be rough on the ladies…they’ll have to have more clothes. And it’s expensive.

“I’m afraid the black dress has bit the dust…John Moore is the only one who can still do it…one after the other…but he cuts and drapes them so beautifully.

“Oh well….[with a wry smile]…a woman has to have one black dress…I’m doing no more than one or two.

“I DON’T THINK YOU CAN SAY THE SUIT IS DEAD. A woman needs a suit…a nice, easy, no-tricks suit.

“What has disturbed women is the over-styling. They want something like Chanel’s successful little suits that don’t tax one.

“COATS ARE MORE IMPORTANT. I made one I like…then I made some others that I didn’t like as well as the first one. So why should I do a lot of different ones and have trouble with the buyers?

“I have only one coat shape in the collection…it’s sort of an ice-cream cone…a high band collar, small shoulders, narrow sleeves and a slight flare.

“Many of the dresses have the same high band neck….sort of ‘delayed Hong Kong influence’….it runs through day and night.

“Yes, even some Hong Kong slits in the skirts.

“FOR EVENING…WELL, I’VE BEEN SCREAMING SHORT, AND I TURNED AROUND AND DID LONG.

“Of course I will do some glitter, though the women might be disappointed that they aren’t skin tight. You need the excitement of glitter, like the shock of fireworks.

“And I’ve done at-home long dresses. Sometimes pajamas don’t look quite right and these dresses fill a need. Of course you could wear them away from home.

“I’m doing some pajamas…but less than before.

“I HAVEN’T GIVEN UP THE TRAVEL PANTS. I’m opening the collection with narrow ones with long cardigans in contrast colors and matching sweaters.

“THE COLLECTION IS MAINLY IN HEAVY SILK CREPES, WOOLENS AND A FEW NOVELTIES.

“I didn’t find any novelty fabrics that I liked so we embroidered them to hell…had to make our own novelties.

“What are you going to do? People are tired of brocade and velours coupe.

“But I’m using hairpieces — small ones — for the first time. They’re anchored on top — no ribbons or bows — and there’s width at the sides no longer than the ear. The kids like them.

“And the make-up….red mouth by day, fuchsia at night…not too heavy on the eyes, not too shadowed. There will be a pink dot on the earlobes…light make-up on the legs with a dot of pink on the knees. We’ll concentrate on the legs.

“And my shoes will be the same that I’ve had forever. Funny, but the chunky heels that used to look so low look higher now.

IT’S HARD TO BREAK IN ON THE ENTHUSIASM NORMAN SHOWS FOR HIS CURRENT — ALMOST COMPLETED — COLLECTION.

BUT HE TURNS HIS THOUGHTS TO RELATED SUBJECTS.

Sidelines like designing scarfs or men’s wear or perfume? “I guess I’m lazy [big joke]. I give so much attention to this one thing that I have no time for all those extras that make you rich. I won’t lend my name to any product that I don’t design myself…though I’ve had many offers.”

“It’s slow in Paris. Sure, it’s a beautiful city but they’re used to it…don’t see it any more. Paris is dull. You don’t see beautiful women everywhere in Paris like you do in London and New York. Paris is always ‘en vacance!’ No matter what month you’re there, there’s no excuse for not seeing chic women….they’re skiing, they’re away in the country. They have only New Jimmy’s and Castel’s….and so what.

“Even a friend in London says what’s happening is here — in New York.

In New York, Norell Likes: The theatre…and galleries and auctions (“I just bought a Tilliard bergere and a Louis XVI gueridon…don’t know where I’ll put them but love will find a way.”)…and new movies (“I’m too old to like the old movies…they’re fresh and amusing for the young ones.”)….and nice simple restaurants like Hamburger Heaven and Schraffts (…”not the in-between places.”).

If he could away right now, he would go straight to Venice, or North Africa.

And he loves Palm Beach: “It’s a very pretty place, so clean and easy to go to for winter weekends. Let the others go to Acapulco.”

Has he ever considered writing a book? “Yes I have…but dropped it. After all, it’s been a long time since I started designing in 1925.”

BUT UNEXPURGATED NORELL IS A BOOK WORTH WAITING FOR.