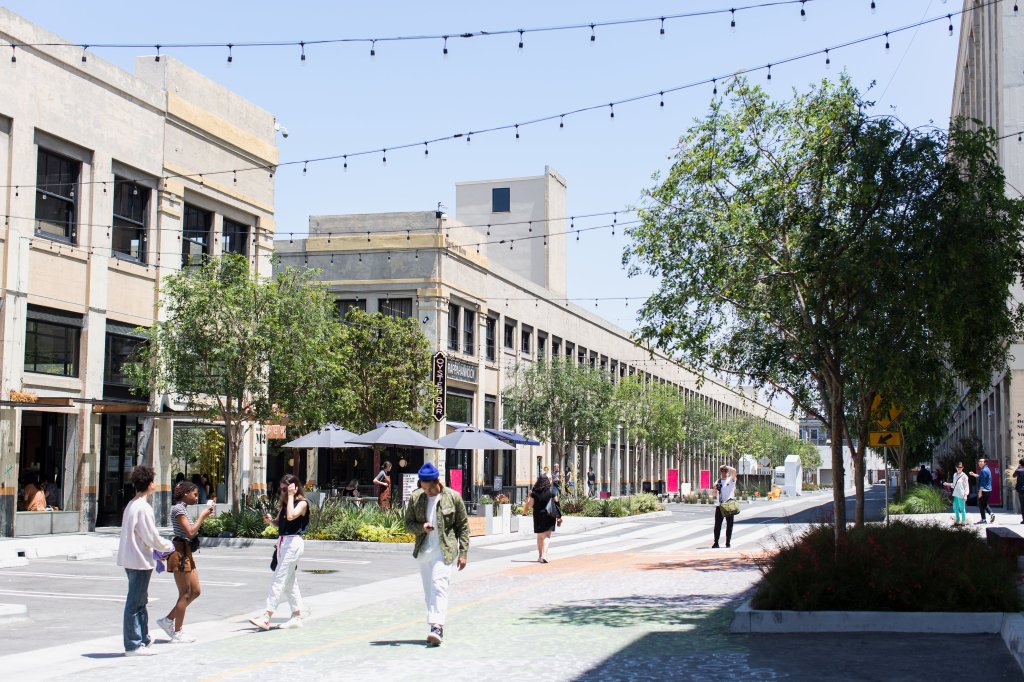 The list of tenants at the Row DTLA, a 32-acre complex in a well-worn industrial district near downtown Los Angeles, sounds like a who’s who of creative types.

Among the first tenants at the warren of warehouses were 7 For All Mankind and Splendid, which moved in back in 2013 before most of the project was completely unveiled five years ago. The two labels are housed in 40,000 square feet of office space in a former warehouse structure that has an artsy vibe.

“The space offers a central location, beautiful natural light, creative spaces, many areas for gathering and access to unique shops and restaurants at the Row,” said Francesca Toninato, global chief executive officer of 7 For All Mankind. “It is all conducive to the creative work of fashion brands.”

Other fashion entities include Shein, which has a sizeable presence, and Shopify, which has a choice spot on the ground floor of another building with a photo studio attached. Adidas has been at the complex for four years, and Athleta has held events there. On the entertainment side, Kimmelot, the media company created by Jimmy Kimmel and partners, is a tenant.

Row DTLA, which is an array of eight warehouse buildings that is like a mini city inside a big city, is attracting tenants not only for its creative ambience, but also for its safety factor.

Safety is an issue that is becoming increasingly important as crime has risen substantially in Los Angeles. A big advantage of the Row DTLA is that it has a large parking structure located within the walled-off compound. Also, private shuttles take employees almost two miles away to Union Station, the downtown Los Angeles train station, that is a hub for light-rail transportation and a Metrolink commuter train to surrounding areas.

Atlas Capital Group is the New York-based real estate investment, development and management firm that launched the project in a complex that originally housed a produce market, warehouses and a railroad terminus. About 10 years ago, Atlas took an interest in the industrial buildings when Jeffrey Goldberger, an Atlas Capital principal, came across the complex built between 1917 and 1923. He envisioned the area as the L.A. equivalent of Manhattan’s Meatpacking District.

In 2015, Atlas Capital bought six warehouse structures, which formed the backbone of the property. Later it bought two more buildings that formerly were occupied by American Apparel, where the T-shirt company had its enormous factory and headquarters before it filed for bankruptcy in 2015 and 2016.

One of the first things Atlas Capital did was build an adjacent 4,000-space multilevel parking garage, which offers two hours of free parking for shoppers and diners and secure daily parking for workers. It is one of the largest parking structures in Los Angeles and provides a sense of security for people who don’t want to walk far from their car to their office. The complex is fenced off from the rest of the gritty neighborhood, which is home to a Greyhound bus terminal, another large produce market and several single-room occupancy hotels fronted by tents for unhoused residents on the sidewalk.

As part of recreating the complex, a central plaza was established by moving a power substation to one corner of the development. Then, from another section of the property, a 40-foot ficus tree was uprooted and moved to the new plaza, where a circular wooden bench was built around the towering greenery. This is now a focal point of the complex, and a pleasant place to hang out.

Complementing the creative offices are independent restaurants and retail spaces housing outposts that sell clothing, furniture, ceramics, home goods, wine and beauty products. They all face a tree-lined thoroughfare that gives the impression a visitor is strolling down a tree-lined section of SoHo. On Sundays, there is a Smorgasburg food market at the 7th Street Produce Market, originally called the L.A. Terminal Market.

“There are a lot of content opportunities here because people can control the space,” said Karen Yi, the director of brand marketing and events for the Row DTLA. “We do a lot of photo shoots on campus.”

The Row DTLA started to fill up nicely after it opened. But then the pandemic hit, and things got pretty tough, said Chris Kitchen, director of asset management for Row DTLA. Even before the pandemic, one of the Row’s major tenants, San Francisco-based Tartine Bakery, with 40,000 square feet, closed its LA Manufactory bakery and restaurant space at the end of 2019 after only 11 months there.

And J Brand moved out as the label diversified from wholesale operations to direct-to-consumer sales. “It was rough,” Yi said. “A lot of activity here thrives on people coming down to their office. It made it difficult for our small and independent tenants.”

Deals were worked out with some tenants, Yi said. But the economy bounced back, and now nearly 80 percent of the complex is leased, and new people are still moving in.

Earlier this year Revolve, the online clothing company launched in 2003, scooped up a sizable space for an auxiliary office.

The Revolve crew now occupies the former J Brand space and then some with 48,000 square feet where designers, photographers and staff work in offices with polished concrete floors, wide square-paned windows and high ceilings.

Prior to moving, Revolve had its auxiliary office in the Los Angeles Fashion District less than a mile away, where its staff worked across four floors of the Gerry Building, a 1940s Streamline Moderne structure dedicated to showrooms and offices. But it needed a roomier, contiguous space to coordinate activities.

Mitch Moseley, CEO of Revolve’s owned brand division, said the company was looking for an office design that inspired creativity and valued safety. “Our priorities became a reality with the secure campus and vibrant culture at Row as the driving factor in the move,” he said.

Fashionphile, a resale website that resells luxury handbags and accessories, moved in a few years ago after looking at spaces for a regional tech office.

“We saw a couple of spaces and then went the to the Row and said, ‘This is home,’” said Sarah Davis, Fashionline’s founder, president and chief creative officer, who noted they also had a pop-up store last year at the Row. “We thought this is the perfect spot for us. The energy here is the kind of energy we wanted for our digital and creative team.”